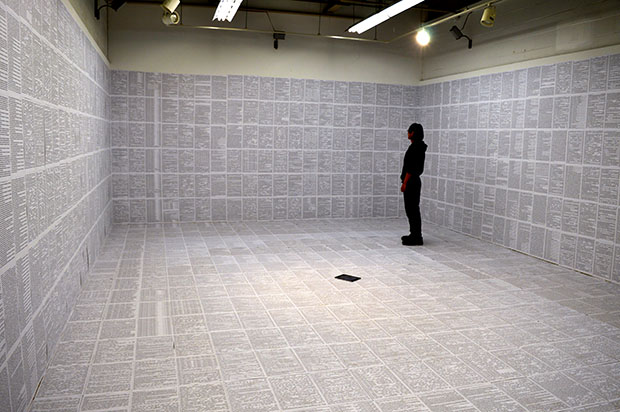 Ozan Atalan’s “Hyper Nothing Mark-up Reality (HNMR),” which will be shown at the Moscow International Biennale for Young Art

Two graduate students in the College of Visual and Performing Arts’ (VPA) School of Art have been selected to participate in Russia’s 5th Moscow International Biennale for Young Art. Ozan Atalan G’16, who is studying sculpture, and Jeremy Santiago-Horseman G’16, who is studying painting, will exhibit work as part of the biennale’s main project theme “Deep Inside,” curated by Nadim Samman, July 1-Aug. 10 at Moscow’s Trekhgornaya Manufaktura.

The Moscow International Biennale for Young Art ranks among the largest and most ambitious projects in the field of contemporary art. The mission of the biennale, founded by the National Centre for Contemporary Arts (NCCA) and the Moscow Museum of Modern Art (MMOMA), is to discover new names of emerging artists, create opportunities for their public demonstration and promote contemporary art in the urban context.

Atalan will show “Hyper Nothing Mark-up Reality (HNMR).” For this work, the gallery is covered by more than 1,000 digital prints of HTML codes of an image from the artist’s Facebook timeline. The digital image displayed on an iPad on the floor is that of a blindfolded bull stranded in a pit full of blood during the Feast of Sacrifice 2014 in Turkey.

“It is a form of escapism to observe facts through the filtering of screens,” says Atalan. “To avoid this, by translating the HTML codes of a virtual image into the physical space, I wanted to create an atmosphere where the audience is intended to participate in a simultaneously cathartic and alienating experience, feel inside the image and realize the perils of losing sense of reality. The installation operates by overwhelming the audience in a claustrophobic environment and making them confront the factuality of what the virtual image depicts.”

Born in Gelibolu, Turkey, Atalan began his art practice at the Dokuz Eylul University School of Fine Arts. He suspended his enrollment in art school for one year in order to fulfill his military obligation in his home country. He earned a bachelor of fine arts (B.F.A.) in 2013 and was soon thereafter granted a Fulbright Scholarship for the master of fine arts (M.F.A.) sculpture program at Syracuse. His versatile background is the driving force behind the transitional multilayers that can be found in his work, which has been exhibited in both nationally and internationally esteemed venues such as Siemens Art Gallery; Kedi Culture and Arts Center; Cetin Emec Art Gallery; Spark Contemporary Art Space; K2 Contemporary Art Center; Goethe Institute; Pera Museum; Istanbul Entrepot No. 3; Angels Gate Cultural Center; Sonce Alexander Gallery Mini White Cube; PØST Los Angeles; Long Beach Arts Council; Syracuse University; State University of New York, Cortland; and Izmir University of Economics.

Santiago-Horseman’s “Sanctuary (a b)” is an installation project culled from myth and mysticism in the midst of our digital era. Inspired by the Yiddish folkloric icon, the golem, a mythical android made of clay, this ongoing installation reshapes itself continuously as it reappears in new environments. It functions as a reflection of a desperate attempt to gain control of traumatic circumstances, placing spiritual attributes within mundane technologies. Clay, binary repetitions and incantatory noise assemble the interior of a body, an anthropomorphic space, simultaneously jarring and meditative. 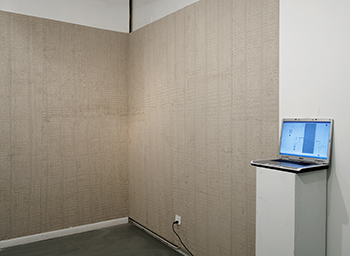 “The recollection of a person or a story is realized through a collision of spaces and objects that we assign to meaning,” says Santiago-Horseman. “I am interested in how relationships between the corporeal, time and space have generated an immeasurable narrative sphere. My work reinterprets a spectrum of folkloric imagery through a more contemporary technological lens, layering the intimate, emotional, even spiritual aspects of folklore with the seemingly banal and emotionless aspects of technology. In my process, fractured narratives emerge from spatial and material constructions, alchemical reductions, ‘elements,’ mud, color, light and sound. By combining the surreal, uncanny storytelling of folklore with an undertow of technological processes, I question if the human mind and body are malleable forms, temperable by the narrative spaces which surround us.”

A Maryland native, Santiago-Horseman studied painting at the Schuler School Atelier in Baltimore and received a certificate of Atelier Apprenticeship in 2004. In 2013, he received a B.F.A. from the Lyme Academy College of Fine Arts in Connecticut. At Syracuse, he has been recognized with various scholarships, assistantships and multiple awards, including the Creative Opportunity Grant and the George J. Vander Sluis Award. Last year he was awarded full funding to participate in VPA’s Turner Semester, a Los Angeles residency program for M.F.A. students. During his residency at Angels Gate Cultural Center in LA, he was included in several gallery exhibitions, including PØST, Sonce Alexander Gallery Mini White Cube, and the Long Beach Arts Council and Museum of Latin American Art. His work is in the permanent collections of UCLA School of Ballet, Los Angeles; the Sigmund Balka Collection, New York; and the LeWitt Collection, New York.