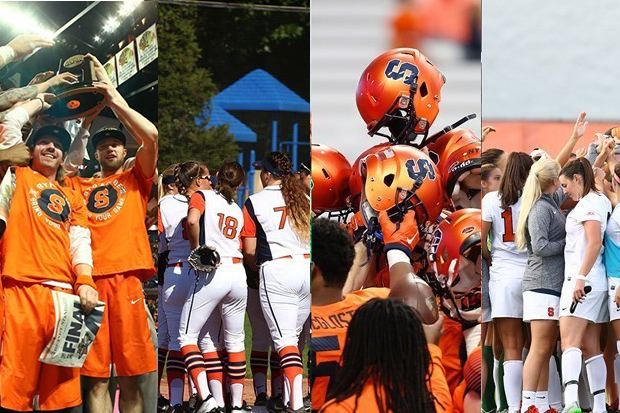 Syracuse’s student-athletes are surpassing the academic achievements of their Division 1 peers.

Syracuse University’s student-athletes are part of a nationwide trend of Division I participants who are making gains in the classroom, according to the most recent measurement of the Academic Progress Rate (APR) announced by the NCAA. In data gathered for the 2014-15 school year, the NCAA saw its Division I members increase the overall four-year graduation rate by one point to 979, while there were three-point improvements in the high-profile sports of men’s and women’s basketball and football.

The NCAA has established a standard score of 930 which, in general, equates to a 50 percent team graduation rate when projected over four years.

For the 2014-15 seasons, each of Syracuse’s programs surpassed the minimum threshold. Among the specific highlights at Syracuse were:

The APR number is determined through the tracking of individual student progression and accumulated program progression at each Division I institution. Scholarship student-athletes earn a point each semester for remaining eligible and a second point for staying enrolled or graduating. The four-year APR is compiled by averaging each program’s performance over a four-year period.

“With the release of our academic progress rate, it is important to congratulate each of our student-athletes who work so hard in the classroom and who represent Syracuse University in such a positive way,” says Tommy Powell, assistant provost for student-athlete development. “In addition, congratulations should be extended to our coaches for supporting their athletes on and off the field. APR is a team effort, and we have a great team.”

“The achievements of Syracuse’s student-athletes in the classroom is every bit as impressive as their performances on fields and courts,” says Rick Burton, David B. Falk Endowed Professor of Sport Management in Falk College and the University’s faculty athletic representative to the ACC and NCAA. “The work of Assistant Provost Powell and his staff has been instrumental in the reported results and Tommy’s commitment to academic excellence is one that truly lifts our students. These results are really notable. They are also appropriate for schools that compete in the ACC, where the commitment to academic performance is a priority.”

A program can also earn APR points when former student-athletes return to the institution to complete their degrees. According to the NCAA, more than 14,000 former college athletes have returned to earn their degrees since the APR was instigated as a measurement tool.

Teams which score below the 930 standard are susceptible to NCAA penalties, which include practice restrictions and playing-season reductions.