Sharing the True ‘Stories of Syria’ with the World 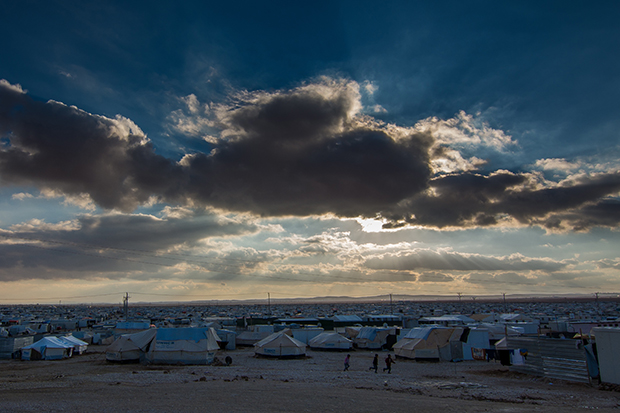 After the attacks on Paris last Nov. 13, Andrew Kimmel ’08 made a life-changing decision. He would quit his job as a successful television producer and devote his full attention—and finances—to “Stories of Syria,” a project he conceived after a 2014 visit to a Syrian refugee camp in Jordan.

“Stories of Syria” is a visual and auditory experience that gives a voice to Syrian people displaced by their country’s ongoing civil war. The project uses the power of true first-person narratives to bring about awareness of the Syrian refugee crisis and promote peace building and humanization through empathy. For Kimmel, it began as a way to find much-needed answers.

“I was perplexed—and even angered—by the images, stories and statistics I was reading about regarding the Syrian conflict in foreign media,” says Kimmel, a graduate of the film program in the College of Visual and Performing Arts’ Department of Transmedia. “How could something of such magnitude be happening in the world, yet there were so few mentions of it in our [U.S.] media? I started looking deeper and found myself wanting to hear more about what was happening from the Syrian people, yet realized there was a lack of in-depth interviews from the refugees themselves.”

While on a one-month hiatus from filming the reality show “The Bachelor,” Kimmel was able to arrange a trip to Jordan and the Za’atari refugee camp, where he met and interviewed some of its many Syrian residents, who today number approximately 79,500, according to the United Nations High Commissioner for Refugees (UNHCR) website. The experience fueled Kimmel’s desire to help tell their stories to the global public. 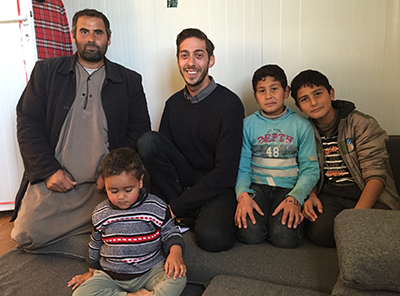 Andrew Kimmel, center, with a group of Syrian refugees he met during his visit to the Za’atari camp

“While visiting the Za’atari camp I was welcomed by complete strangers,” he recalls. “They were excited to show me around their tents and introduce me to their children and talk about their lives. My interpreter, who was also a refugee in the camp, had his family prepare a feast for me with what little food they had. Their compassion left a lasting impression. How could so many terrible things happen to such kind-hearted and gentle people, and why is so little is being done to help them?”

After the visit, Kimmel returned to Los Angeles, but found he had lost his enthusiasm for television work. He longed to devote himself to documentary filmmaking and the people he met who would shape “Stories of Syria.”

“I interviewed a 17-year-old boy who had one of his legs wrapped in a garbage bag,” says Kimmel. “His leg had been shot with seven bullets, and he now had gangrene. For nearly a year he has been dragging around that leg, waiting for a capable doctor to amputate it. The camp lacks the resources to be able to do it. Yet he smiled as we spoke, and after sharing his story with me through an interpreter, he said in perfect English, ‘I love you’ and gave me a hug.”

Kimmel finally decided to leave the television industry and work on “Stories of Syria” full time after witnessing the response by some in the U.S. to the Paris attacks.

“Seeing American politicians and citizens blame Syrian refugees was sickening,” he says. “It was now front page news here but for all the wrong reasons.”

Kimmel developed a proposal for “Stories of Syria” that involves interviewing men, women and children in countries around the world who have been displaced by the Syrian conflict. His goal is to premiere the interviews in a gallery experience in New York City and via an interactive online database, as well as produce a long-form documentary that focuses on four refugees. Thus far he has been able to secure the support of five non-governmental organizations and nonprofits. He also secured fiscal sponsorships with Academy Award-winning filmmaker D.A. Pennebaker’s Living Archives and Fractured Atlas, and he launched the website http://www.storiesofsyria.org. 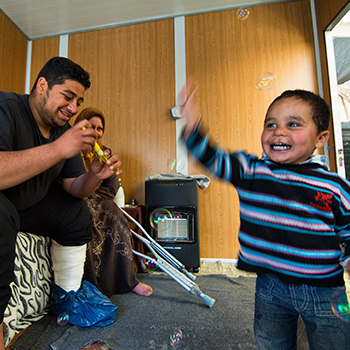 Teenager, left, whose leg had been shot and had developed gangrene

“It is my hope that the project continually builds its online database with more and more stories,” he explains. “Each story is unique and will resonate differently for each viewer. I want the public to ‘meet’ at least one refugee and to walk away feeling more informed and inspired by that story and ultimately feel more personally connected to the crisis because of it.”

Initially, Kimmel funded “Stories of Syria” himself—even going so far as to sell his car—but he is now looking for outside funding options to complete the project (visit Fractured Atlas for more information). The lack of a paycheck has not deterred his passion for the project, which he hopes will inspire viewers to promote positive change.

“The Syrian refugees come from all backgrounds, and each of them has an unbelievable story to share,” he says. “I found that each person who shared their story with me brought me that much closer to them, and that if I was able to replicate this interaction for others, perhaps more people would find themselves inclined to do something to help.”