President and CEO of the U.S. Fund for UNICEF Speaks at Syracuse University

On Wednesday, April 6, Caryl M. Stern, president and CEO of the U.S. Fund for UNICEF, visited campus.  Stern’s visit included a talk with a group of campus and community members, hosted by the Winnick Hillel Center for Jewish Life, about the importance of saving and protecting the world’s children. Stern also spent the next morning with a group of Maxwell School students with deep interest in the U.S. Fund for UNICEF’s response to the Syria crisis. 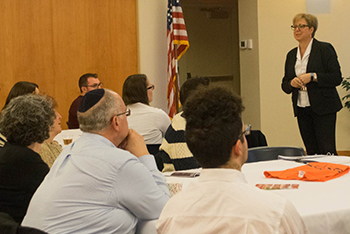 “We are so fortunate to have had Caryl Stern come to the Syracuse University campus, share stories with us about her involvement with international humanitarian efforts and express what that means in relation to being Jewish,” says Brian Small, executive director of Hillel. “I know I can speak on behalf of all those that were present from the Syracuse University community and the Jewish Federation of Central New York when I say that Caryl captivated us with her words and has inspired us with her actions.”

During her talk, Stern recalled experiences throughout her life that showed her the importance of protecting people in need, especially children. These stories ranged from explaining how Stern’s own family first came to live in the United States to sharing her memorable encounters with individuals in Mozambique and Syrian refugees in Jordan who had shown strength in the face of adversity. Growing up in a New York City suburb in the 1960s, Stern’s childhood involved participating in the civil rights, women’s rights and LGBT rights movements. It was her childhood experiences with social justice that led Stern to the work she has done over the last four decades.

Since joining the U.S. Fund in 2006, Stern has traveled to nearly 32 countries in support of UNICEF’s work to save and protect the world’s most vulnerable children and, during her tenure, the U.S. Fund for UNICEF has nearly doubled its fundraising revenue. In 2013, Stern also published her highly acclaimed book “I Believe in ZERO: Learning From the World’s Children,” which provides first-hand accounts of Stern’s travels and the lessons she learned from individuals and communities around the world.

In her time at UNICEF, Stern has spearheaded the organization’s efforts to galvanize Americans to help children affected by disasters such as the 2010 Haiti earthquake, the 2011 East Africa drought and the Ebola crisis. Her goal is to reduce the daily number of preventable child deaths from 16,000 to zero.

In Judaism, Stern’s work would be considered a part of tikkun olam, or restoration of the world. It is the idea that all people have the duty and responsibility to help heal the world of social injustices and harmful acts. Stern reminded those present at her talk that today’s children are 100 percent of the future and all deserve basic human rights and protection by the adults and decision makers of the world.

“As parents, we all want the same thing for our children—a warm meal, a blanket, a dream to dream. We want them to have everything they could ever hope for,” said Stern. “The love that we feel for our children is not defined by nationality, or religion, or anything else. It is defined by our desire for them to have it better than we had it, to have more than we had, and to have all that they will ever need.”

At the conclusion of her talk, Stern recounted a remarkable moment she had during a recent trip to the Zaatari refugee camp in Jordan. As she and other aid workers toured the camp’s facilities, young children from the camp began to follow them—interested to see what they were doing, but too shy to interact.

By the final stop, the group realized that they, including the children, had yet to eat that day. One worker reached into her pocket, pulled out a nutrient-rich biscuit she had been given earlier, and handed it to one of the little boys who had followed them. The boy, no older than 3 or 4, looked excitedly at the food in his hands and then, without hesitation, broke the biscuit in two and handed the other piece to one of the other children.

“This little boy, who must have been starving, who had probably not had this much to eat in a long time, took the very little he had just been given and immediately shared it with someone else. It was an act of true and sincere humanity,” said Stern. “We are all part of a global village responsible for one another and each of us has a biscuit buried somewhere in our pocket. All I ask is that a person reach into his or her pocket, find that biscuit and share some of it with those who are most in need in this world.”