Retired professor of child and family studies Bettye Caldwell passed away on April 17. Her work in the 1960s at the Children’s Center of Syracuse provided the foundation for what became one of the most important components of the Great Society programs known today as Head Start. 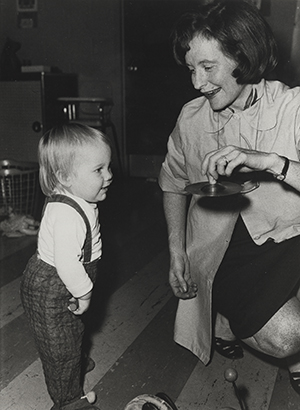 Professor Caldwell, who chaired the Department of Child and Family Studies, worked for more than five decades in comprehensive early childhood development programming, primarily serving low-income preschool-age children and their families. During this time, she worked closely with Julius Richmond, then-chairman of pediatrics at Upstate University. In 1967, they formed the Children’s Center in Syracuse, the first early intervention program in the country. At that time, it was forbidden in New York State to care for infants in groups. Caldwell’s advocacy resulted in a special waiver that paved the way for creation of the Children’s Center.

Receiving huge national interest, the center—operating from an old house on East Adams Street—had more than 1,000 visitors in its first year, including Eunice Shriver. Caldwell credited these national figures with drawing attention to the program and helping it survive in the early years.

“Dr. Bettye Caldwell was a true pioneer in her field. Syracuse University is so very proud of her lifetime dedication focused on putting the best interests of children first, and providing countless individuals and families the tools they needed to do the same,” says Diane Lyden Murphy, dean of Falk College. “We are forever grateful that her commitment touched our campus and community so deeply in the time she and her family spent in Syracuse.”

In 1969, Caldwell relocated with her family and served on the faculty of the University of Arkansas-Little Rock for many years. In Little Rock, she established the early education project at Kramer School for young children through age 12. “Bettye thoughtfully and deliberately created an infant center in the school so that young students in different grades and classes could visit and learn nurturing ways with babies and well-trained caregivers who were available right in their own school building,” reflects former graduate student of Professor Caldwell and now professor emerita of child and family studies in Falk College Alice Sterling Honig.

In an interview in 2014, Professor Caldwell noted, “I met Alice Honig professionally in 1963, when I had my first major research grant, ‘Infant Learning and Patterns of Family Care.’ The grant had one position for a research assistant, and I hired Alice. It is with great happiness and pride that I claim that her experience on this early research project helped prepare her for her own independent and self-initiated research in the years that followed.”

While they worked together at Syracuse University, Caldwell and Honig found little documentation was available to plan curriculum that would help children thrive. “Bettye and I and others would meet at night back at the center, after putting our children to bed (and getting babysitters), to hammer out what we thought theorists would want us to do to help the littlest ones flourish,” recalls Honig. “We’d ask ourselves, how would the theoretical writings of Erikson and Piaget translate into practice and programmatic interactions? We truly felt like pioneers.”

Caldwell led a team of psychologists and psychiatrists to China, which included Honig, that was the very first such group after the Cultural Revolution to be allowed by Mao Tse Tung to visit child care centers and children’s hospitals. With a reputation and scope of influence that was global, Caldwell received many awards throughout her career, including the 1978 Ladies Home Journal Woman of the Year for which she was honored at a ceremony joined by Betty Furness, Maya Angelou, Kate Smith and Betty Ford.

In September 2014, a generous gift from Professor Caldwell created the Dr. Alice Sterling Honig Endowed Scholarship Fund to benefit students majoring in child and family studies at Syracuse University. “Thanks to her visionary generosity, students of the future will have the opportunity to build upon Dr. Caldwell’s innovative work that is such a critical part of both Falk College history and national social programs in early childhood intervention,” adds Dean Murphy. For more information on making a gift to the scholarship created by Professor Caldwell, contact the Falk College Office of Advancement at 315-443-8989.