The College of Visual and Performing Arts (VPA) has received $19.8 million from the estate of Dorothea Ilgen Shaffer ’33, H’90, an alumna of the School of Art and an honorary member of the University’s Board of Trustees. The bequest is the college’s largest single gift ever. 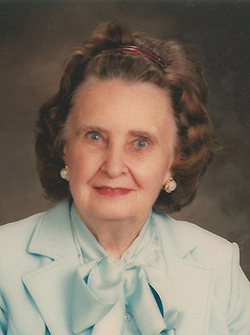 Shaffer, who died in 2012 at the age of 101, worked as a public school art teacher in Harrisburg, Pa., and founded Ilco, a commercial interior design firm. She and her lawyer-husband, Maurice, were longtime donors to the University. He died in 1997.

At Syracuse, the Shaffers are perhaps best known for providing the lead gift ($3.25 million) for the construction of VPA’s Dorothea Ilgen Shaffer Art Building. Since it opened in 1990, the 95,000-square-foot building, located on the southeastern corner of the Kenneth A. Shaw Quadrangle on Main Campus, has brought together an array of artistic disciplines under one roof.

“It’s a great day for Syracuse, as we celebrate one of the largest single gifts in the University’s history,” Chancellor Syverud says. “The Shaffers’ incredible generosity will enhance support of faculty excellence, student access and opportunity, and academic programs across the college. Although I never had the pleasure of meeting them, I have deep appreciation for the Shaffers, whose philanthropy, over the years, has molded the University into a creative and cultural destination.”

This bequest will benefit multiple areas in VPA, notably the School of Art, School of Design and Department of Transmedia. In addition to establishing a scholarship for industrial and interaction design majors (named for Dorothea’s mother, Katherine Adams Ilgen), the gift will build on the Shaffers’ existing support of talent-based scholarships, awards for graduate students pursuing M.F.A. degrees, professorships in art and art history, and visiting artists and scholars.

Also, the bequest will enable VPA to solidify the future of the Shaffer Art Building, home to a 300-seat auditorium; a 60-seat lecture hall; a lounge and gallery space; facilities for painting, illustration, art photography, art video, computer art and animation, and film; and faculty and administrative offices.

VPA Dean Ann Clarke is grateful for Shaffer’s generosity, citing the impact it has on interdisciplinary teaching and learning. “The Shaffers understood the transformative power of the arts—and philanthropy,” she says. “This bequest will enable thousands of young artists, from all over the world, to reach their creative and professional potential. At the same time, it reinforces VPA’s commitment to teaching, research, artistry and service at the highest level.”

“Being with Mrs. Shaffer was like stepping into the Syracuse University Archives,” he says. “Her recollections as a student, as well as her later visits to campus as a Trustee, especially for the dedication of Shaffer Art Building, were quite moving. She was passionate about learning, and believed in the University, its students and its faculty.”

Born in 1911 in Eastern Pennsylvania’s rough-hewn Coal Region, Shaffer, along with her brother, grew up in a Masonic Children’s Home in Elizabethtown, near Harrisburg. After high school, Shaffer earned a B.F.A. from Syracuse, where she participated in the English Club and the Tri Delta sorority, and an M.A. from Penn State.

Shaffer served on Syracuse’s Board of Trustees from 1968 to 1980, when, upon her retirement, she was named an honorary trustee. She also served on VPA’s advisory council and was a seven-term president of the Central Pennsylvania Chapter of the University’s Alumni Association. In 1990, she was awarded an honorary doctor of fine arts degree from Syracuse. Other honors included the Outstanding Alumni Award and the Melvin Eggers Senior Alumni Award.

She was a lifetime member of the London-based Royal Society for the Encouragement of Arts, Manufactures, and Commerce; president of the Associates of the State Museum of Pennsylvania in Harrisburg; vice president of the board of trustees of Shippensburg University; and a trustee of Messiah College.