Tulipe Hosenn ’17 has visited places all over the world, including Australia, China, India, Vietnam and the United States. But her native Bangladesh holds a special place in her heart. “The spirit of Bangladesh is in my blood,” she says. “We love our families We are a celebratory culture with lots of colors and fireworks and a lot of amazing foods.” 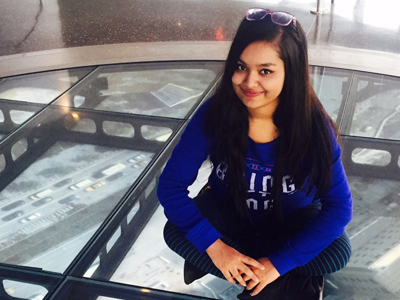 Her commitment to shared identity and values led her to apply to intern with Disney ABC Television Group in Burbank, Calif. She will spend the summer in the company’s Corporate Citizenship and Social Responsibility Department. “It feels like a dream opportunity,” she says. “Disney is a name that decorated my childhood. As a Disney intern I’ll get to be part of an incredible team.”

Hosenn can name all the Disney princesses (Anna from “Frozen” is her favorite), and she’s a Minnie Mouse fan. “I actually know how to draw Minnie,” she confesses. “I like to draw the ears and fill in the nose.”

Disney, she says, is one of the most powerful brands in the world, and it use its power to promote social consciousness and philanthropy, through a corporate commitment to sustainability, diversity, education, arts and culture and more. Her appreciation for unity around common values stems from her Bangladeshi heritage.

She’s traveled extensively, thanks to her mother’s career as a pediatrician and a former director of Bangladesh’s Ministry of Health. “I spent half my life in airports and hotels,” she says. “I went on my first flight when I was 5. It was very normal for me to be dragged out of school to go to the next country.”

Her exposure to many cultures inspired her work with UNICEF. She is the president of UNICEF at Syracuse University and serves on the Campus National Council of the U.S. Fund for UNICEF, representing the New York and New England regions. UNICEF at Syracuse presents two major events each year: the Snowflake Ball and Water Week. Each event seeks to educate, advocate and raise funds to alleve difficult situations in which millions of children live around the world.

“As a social justice activist, I have had the opportunity to explore various nonprofit platforms and how they stand on their values and embrace broad goals of making an impact on their communities,” she explains. “These goals must extend to the corporate world, and that’s why I was interested in working with Disney.”

For her first two years at Syracuse, Hossen was undecided about her major, considering broadcast, nutrition, public health, English and engineering. “I don’t recommend everyone follow that path, but it worked for me,” she says. “I’ve been more driven by the experiences outside the classroom.” She finally settled on a political science major. 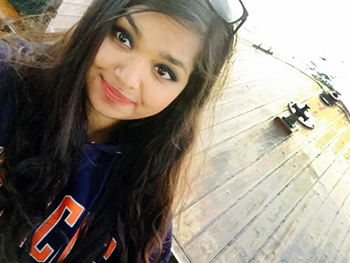 Outside experiences include an internship this semester at U.S. Sen. Charles Schumer’s Syracuse office. She also tutors for Say Yes to Education; volunteers occasionally at Citrus TV and Z89 radio; and serves as a peer educator with Be Wise Syracuse, an alcohol awareness campaign. She’ll spend the fall semester with Maxwell in DC, where she’ll study and hold an internship.

She’s looking forward to connecting her interests in this summer’s internship at Disney ABC Television Group. “Just like when I applied to Syracuse, I had to research it to see what their values are,” she says. “I found that Disney is world renowned for its corporate citizenship.”

She agrees that Disney’s traditional princesses represent stereotypical female roles. But she’s encouraged that newer Disney stories reflect more diverse characters and experiences. “Disney is en route to embracing the power of diversity and inclusion, and female empowerment has embraced change,” she says. “I wouldn’t even apply to work in a company that wouldn’t represent the values that I personally believe in or values that impact me as a Millennial.”