A group of College of Law LL.M. students recently traveled to Albany to visit the State Legislature and meet with key participants in the state legislative process. 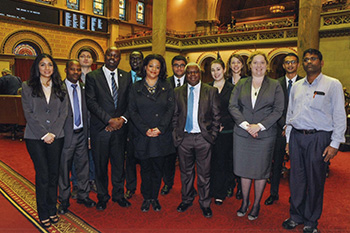 The group began the day meeting with New York State Assembly member Pamela J. Hunter. She discussed her time in office and answered their questions about state government.  She then introduced the group on the State Assembly floor.

Following their visit to the assembly, the students toured the New York State Court of Appeals and met with John P. Asiello, chief clerk and legal counsel to the court. The students ended their day with a visit to the New York State Bar Association (NYSBA), where they had a chance to tour the headquarters and visit with NYSBA President David Miranda. Miranda and his staff offered the students information about the largest voluntary state bar association in the country, including its ties to the international legal community.

LL.M. student Mathias Wani, from South Sudan, remarked about the trip, “I was amazed by an assembly that is people-driven. In all our interactions with the representative for Syracuse, I saw her concern being the people’s needs and listening to their voices so as to raise the issues in the assembly. The New York Bar Association was great with the level of organization, leadership, and the foreign program was the most striking.”