University Professor David Driesen recently spent two weeks giving lectures on his book “The Economic Dynamics of Law” at a number of universities throughout China. The focus of his discussions was on environmental law and greenhouse gas emissions trading. 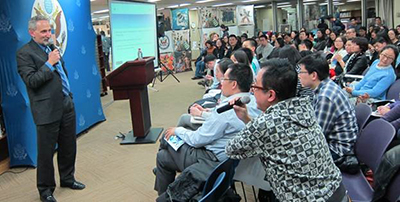 “The Economic Dynamics of Law” is about the theory of law and economics focused on change over time. Driesen concretized this approach by presenting it in the context of climate policy, including emissions trading. Professor Driesen tailored his discussions to the varied groups he met with.  In a meeting with a group of Beijing environmental groups, he placed a greater emphasis on emissions trading. When he spoke at UIBE and the American embassy, he discussed the theory’s application to financial regulation (in addition to climate disruption).

Driesen also met with experts involved in China’s emerging emissions trading program for greenhouse gases and presented the College of Law’s LL.M. in American Law program to a number of interested partners. He has extended visiting scholar offers to prominent legal faculty members to further the exchange of ideas and the ties between SU on potential Chinese partners.