The Newhouse School will host Michael Copps, former commissioner of the Federal Communications Commission (FCC), and Todd O’Boyle, director of the media and democracy reform initiative at Common Cause, on Wednesday, April 13. They will present “Media and Democracy in 2016: Looming Lessons in an Election Year” at 5 p.m. in the Joyce Hergenhan Auditorium in Newhouse 3. 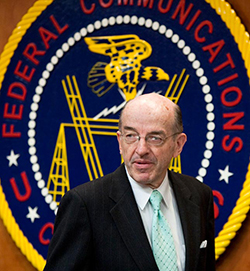 Copps served as a member of the FCC for 10 years, and was appointed acting chair by President Barack Obama. As a strong voice in opposition to consolidation in the media, he dissented in the FCC vote on the Comcast-NBCUniversal merger. He has been a consistent proponent of localism in programming and diversity in media ownership.

Before joining the FCC, Copps served as assistant secretary of commerce for trade development at the Department of Commerce and chief of staff to U.S. Sen. Fritz Hollings (D-SC) from the early 1970s to 1983. He now serves as a special adviser for Common Cause’s media and democracy reform initiative and sits on the boards of Free Press and Public Knowledge. He holds a Ph.D. in history from the University of North Carolina at Chapel Hill.

O’Boyle joined Common Cause in September 2012 and is responsible for research, advocacy and strategy for media reform. Before joining Common Cause, he worked as a political staffer. He has experience in grassroots political organizing and designing persuasive communications at the local, state and federal levels. He holds a Ph.D. in urban affairs and public policy from the University of Delaware.

For more information about the event, contact Karen Greenfield at 315-443-2304 or kegreenf@syr.edu.