Vance George, the Grammy Award-winning conductor emeritus of the San Francisco Symphony Chorus, will be the guest conductor for the University’s 13th Annual Invitational Women’s Choir Festival and concert on Saturday, April 16. The theme of the festival is “Joyfully We Sing.” 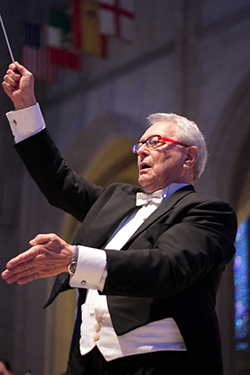 Approximately 170 collegiate, high school and adult singers from South Hadley, Mass.; New York City; Cazenovia, N.Y.; and Penfield, N.Y., will join forces to present a concert at 2 p.m. in the Rose and Jules R. Setnor Auditorium, Crouse College, hosted by the Syracuse University Women’s Choir.  The festival is under the artistic direction of Barbara M. Tagg, faculty member in the College of Visual and Performing Arts’ Rose, Jules R. and Stanford S. Setnor School of Music.

The concert is free and open to the public. For most Setnor Auditorium concerts, free and accessible parking is available in the Q-1 lot. If the lot is full or unavailable, patrons will be directed to an alternate lot. Campus parking availability is subject to change; call 315-443-2191 for current information.

Under the direction of George, the combined choirs will sing “Sicut erat” from “Magnificat” by Niccolai Porpora, “Lift Thine Eyes” from “Elijah” by Felix Mendelssohn-Bartholdy, “Cantique de Jean Racine” by Gabriel Fauré and “Walk in Jerusalem,” arranged by Rollo A. Dilworth.

Members of the Greater Rochester Women’s Philharmonic with Nancy Strelau, conductor, will perform the Allegro from Concerto in D for three violins by J. S. Bach, and the chamber orchestra will join George for selected works with choir.

For its individual performance, the SU Women’s Choir will premiere Montreal composer Marie-Claire Saindon’s “Day’s Voices,” the winning composition of the 2015 Gregg Smith National Choral Composition Contest. Performances by the guest choirs will include “Aglepta” by Arne Mellnas, “The Poet Sings” by Z. Randall Stroope, “Crossing the Bar” by Gwyneth Walker and “My Soul’s Been Anchored in the Lord,” arranged and adapted by Dilworth. 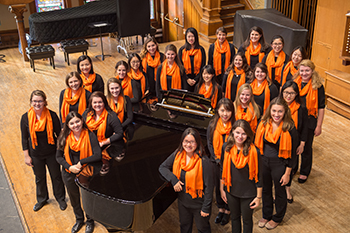 George is internationally recognized as one of America’s leading choral conductors. Under his direction the San Francisco Symphony Chorus has been hailed as one of the finest in the world. On their behalf he has accepted four Grammy Awards, for Best Performance of a Choral Work for “Orff: Carmina Burana” and “Brahms: Ein Deutsches Requiem” and Best Classical Album for “Stravinsky: Perséphone” and “Mahler: Symphony No. 3.” He also conducted the San Francisco Chorus and Orchestra in works ranging from Bach’s Mass in B Minor to “Carmina Burana.” His television and film credits include an Emmy Award for “Sweeney Todd” and soundtracks for “Amadeus,” “The Unbearable Lightness of Being” and “The Godfather: Part III.”

George’s work embodies the legacy of the great maestros he has known as protégé and colleague, especially Robert Shaw, Julius Herford, Margaret Hillis, Robert Page, Otto Werner-Mueller and Mary Oyer. He has received great acclaim for his unique knowledge of musical styles, languages, vocal colors and his synthesis of the choral-orchestral tradition. He was awarded an honorary doctorate by Kent State University and a Lifetime Achievement Award from Chorus America.

For more information about the festival and concert, contact Tagg at 315-443-5750 or btagg@syr.edu.