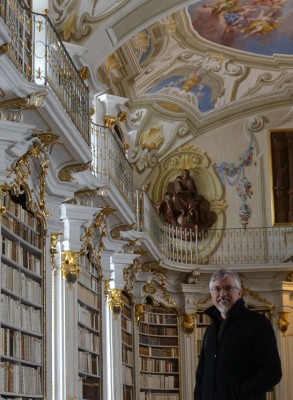 Professor James W. Watts in the baroque library of Admont monastery in Austria.

A fellowship funded by Germany’s Ministry for Education and Research has allowed religion professor James W. Watts to apply his work on the Syracuse University-based Iconic Books Project to a broader study of the interaction of religion and the senses.

Watts is completing a year as a Käte Hamburg Kolleg visiting fellow at Ruhr University in Bochum, Germany. He is part of an international research group at the Center for Religious Studies (CERES).

Watts, an expert in the Hebrew Bible and ancient Near Eastern textual traditions and former chair of Syracuse’s Department of Religion, founded the Iconic Books Project in 2001. The project catalogs and describes the symbolic or “iconic” uses of books and other texts. The idea, Watts explains, is that books themselves are considered valuable separate from the words and ideas they contain.

Examples include a Catholic priest kissing the Gospel, or, in the Jewish tradition, rules that govern how to handle the Torah. Secular examples include the respect afforded Shakespeare’s folios or the U.S. Constitution.

“Nobody has thought much about the iconic use of books,” Watts says. “It’s a whole new realm not just of religious studies but of the humanities. The value of books comes not just from what books say and their meaning on the page, but their ritual uses as physical objects.”

Watts will host “Seeing, Touching, Holding, and Tasting Sacred Texts,” on April 7 and 8. The international symposium he organized will feature scholars from Germany, Sweden, Denmark, Spain, Korea and the United States. Watts will present “Scripture’s Iconic Touch” at the symposium.

Watts has been surprised at the prevalence and consistency of ritual uses of books across traditions and time periods. Art from Ancient Egypt, Greece, and Rome, for example, depicts people displaying scrolls the same way a rabbi holds up the Torah—as a demonstration of the book’s importance.

After the CERES symposium, Watts will edit and publish the papers as a collection. His research also is informing his book in progress, “Understanding the Pentateuch as a Scripture.” (The Pentateuch consists of the first five books of the Bible: Genesis, Exodus, Leviticus, Numbers, and Deuteronomy.)

In addition to the history of biblical interpretation, his book will also cite ritual and performative uses to explain how the Torah and Bible became important to Judaism and Christianity. “It turns out that seeing, hearing and touching the books in rituals has played a large role in establishing and maintaining scripture’s influence,” he explains.

Maxwell’s advisory board has a vital role in guiding the school’s efforts in diversity, equity and inclusion. At a recent Maxwell School Advisory Board meeting, member Mary Daly G’91, G’94 posed a question—or perhaps it was a challenge. As she…

Looking for a good book or two to round out your bookshelf? We asked the University’s deans to share titles they were digging into this summer, and they did not disappoint. Shop Amazon, the Campus Store or your favorite local…