Senior Vice President for Enrollment Management Christopher M. Sedore has announced he will conclude his tenure at the University to begin a new position as the next president of the New York State Education and Research Network (NYSERNet). Sedore, who has been a longtime member of NYSERNet’s board, will begin in his new role on May 9. 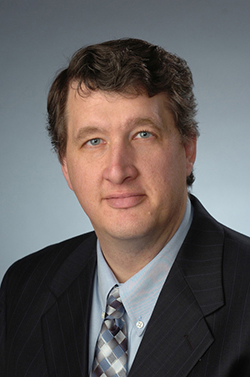 Throughout his more than 20 years at the University, Sedore held a number of key leadership roles before being named to his current role in May 2014. Prior to that he served as the University’s associate vice chancellor for academic operations, and for six years before that as the vice president for information technology and chief information officer.

Sedore advanced the University’s mission through its information and technology services—expanding ITS applications to assist researchers, increasing enrollment and extending the reach of Syracuse academics through the development of dynamic online coursework with 2U Inc.

“For more than two decades, Chris Sedore has played key roles in moving Syracuse University forward,” says Interim Vice Chancellor and Provost Liz Liddy. “From creating a campuswide research computing environment, to developing groundbreaking online degree programs to raising the academic profile of Syracuse’s entering classes, Chris has made the University a better place. NYSERNet has made an outstanding choice and its board and staff will benefit from Chris’s leadership.”

Sedore’s leadership in IT at the University began in 1994. He served first in the Maxwell School as manager of network services, then as advanced technology director and finally as director of the Information and Computing Technology group. Sedore joined ITS in 2005 to become the University’s director of network and systems management and chief technology strategist. He was promoted to associate chief information officer in 2007.

As a member of the NYSERNet Board of Directors since November 2008, Sedore has deep connections with the NYSERNet community, and comes with a profound understanding of the challenges in both research and education that its institutions face.

NYSERNet is a private, not-for-profit company that provides advanced networks and network resources to the research and education community.