“We are committed to having this conversation, to moving that bar forward. Not just for one night, but a continued and sustained conversation,” says keynote speaker Don McPherson at Take Back the Night, a sexual assault awareness and prevention rally hosted Wednesday night by Syracuse University students and partners in the local community. 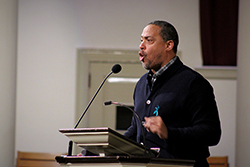 Don McPherson addresses the crowd during the Take Back the Night event at Hendricks Chapel.

McPherson himself attended the University and was the unanimously voted All American team captain of the undefeated 1987 football team. He went on to play in the NFL and the Canadian Football League. However, McPherson now spends his time educating college students, and more specifically, college men, about the importance of promoting a positive dialogue surrounding sexual assault prevention.

He highlights the issue of men’s privilege; or, more plainly, the fact that men don’t need to think about a long list of “don’ts” that they must adhere to in order to protect themselves from sexual assault; phrases like, “Don’t dress that way,” or, “Don’t take your eyes off your drink.”

In fact, the existence of any type of preventative measures that women are instructed to take is a testament to the prevalence of the illogical practice of blaming women for their own sexual assault. If a woman fails to adhere to some guideline, and is then sexually assaulted, there is an implicit implication that it was somehow her fault, because she did not properly protect herself. In reality, blame rests solely on the individual who committed the crime. McPherson urges college students to correct the dialogue, and understand the impact that they are capable of having.

And his advice reaches a huge audience. Students filled every available seat at the event, and even lined the walls, standing in an enormous, campuswide show of support for the rally. Additionally, organizations pledged their support for the cause through the creation of painted banners, each displaying colorful handprints and positive messages. Organizations including A Men’s Issue, the Girl Code Movement, Vera House and SASSE (Students Advocating Sexual Safety and Empowerment) were all in attendance, and contributed to the planning and execution of the event.

However, Take Back the Night is only the kickoff event for the larger Week of Action, which will begin this coming Monday, April 4, as part of the national initiative It’s On Us. 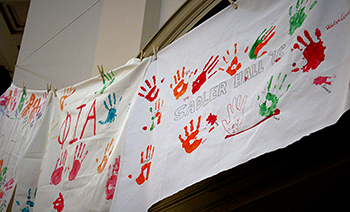 “Myself and other student activists have worked tirelessly to plan a week filled with many different events to spread awareness,” says Samantha Skaller ’16, an It’s On Us representative at Syracuse University and one of the student leaders who was instrumental in the planning of Take Back the Night and Week of Action. She continues, “The It’s On Us Campaign’s goal is to have everyone in our Syracuse University community to realize the role that they have to stop campus sexual assaults at SU. I hope everyone will join me, and the other student activists, in participating during the Week of Action.”

Some highlights include a candlelight vigil, a massive art installation on the Quad illuminating the intersection between alcohol and consent, and workshops to educate and train future leaders on how to effectively address and end sexual assault on college campuses.

A full list of events can be found here.

“Take Back the Night is designed to empower survivors and allies,” concludes Skaller. “It’s a powerful way to kick off the It’s On Us Week of Action.”