The Lawrence B. Taishoff Center for Inclusive Higher Education hosted a hip-hop dance performance on March 2 in Huntington Hall’s Sharon H. Jacquet Education Commons, featuring students in the “Introduction to Hip-Hop” class, including two InclusiveU students. The performance, titled “Be The Change,” incorporated elements from Martin Luther King Jr.’s “I Have a Dream” speech, demonstrating how far we have come as a society. 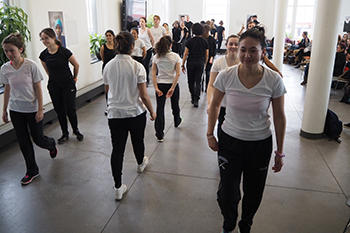 Students take part in a hip-hop dance performance hosted by the Lawrence B. Taishoff Center for Inclusive Higher Education.

About 25 of MacPherson’s students participated in the performance, each one connecting with the music at their own level. The dance piece promoted a message that celebrated difference and hope in action. It emphasized the idea that dance has the ability to share the message, and hip-hop stands for unity and power. The performance also included dialogue and interaction with the audience and the dancers. Some performers shared their experiences, while audience members contributed to the dialogue on dance and hip-hop culture.

“The best part was working together and feeling each other,” says Naomi Flores, one of the student performers.

“Each student played a unique and important role for the overall performance event,” said MacPherson after the show. “The performance was special because it was an opportunity for students to celebrate and affirm their commitment to each other while sharing their accomplishments with the larger campus community.”

“I have taught dance classes with mixed abilities in the past,” says MacPherson, “and one challenge that I had in the beginning was building community among students with varied abilities. I have since learned to better gauge and respond to relational dynamics and comfort levels,” she says.