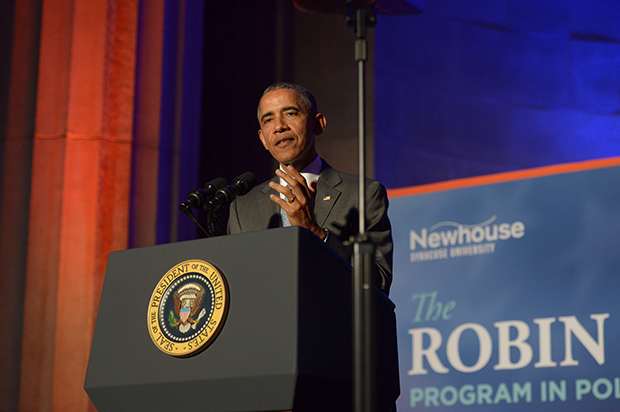 President Barack Obama delivered the keynote address at the Newhouse School’s Toner Prize Ceremony March 28 in Washington, where ProPublica’s Alec MacGillis was awarded the Toner Prize for Excellence in Political Journalism. The award is given in memory of late alumna Robin Toner ’76, who was the first woman to serve as national political correspondent for The New York Times.

The president was introduced by Syracuse Chancellor and President Kent Syverud, who opened with a tongue-in-cheek apology to Obama. “We are sorry we blew both the president’s brackets,” he said, referring to the fact that both Syracuse’s men’s and women’s basketball teams have made improbable runs to the Final Four rounds of their respective NCAA tournaments. The president, in his speech, countered with, “Thank you, Chancellor, for those remarks, and reminding me of how badly my bracket is doing.” He went on to say, “Congratulations, Syracuse, you guys are doing great.”

Obama, who is rounding out his second term as president, gave a thoughtful speech about the importance of political journalism, telling the reporters in the room: “Our democracy needs you now more than ever.”

Obama discussed the dismay many feel at the divisive atmosphere on the campaign trail today. “And so it’s worth asking ourselves what each of us—as politicians or journalists, but most of all, as citizens—may have done to contribute to this atmosphere in our politics,” he said. “And I think it’s the kind of question Robin would have asked all of us. As I said a few weeks ago, some may be more to blame than others for the current climate, but all of us are responsible for reversing it.”

Obama went on to discuss the historically important role played by journalists, and the recent changes and pressures that have made that role more important to play. “Whether it was exposing the horrors of lynching, to busting the oil trusts, to uncovering Watergate, your work has always been essential to that endeavor, and that work has never been easy,” he said. “And let’s face it, in today’s unprecedented change in your industry, the job has gotten tougher. Even as the appetite for information and data flowing through the Internet is voracious, we’ve seen newsrooms closed. The bottom line has shrunk. The news cycle has, as well. And too often, there is enormous pressure on journalists to fill the void and feed the beast with instant commentary and Twitter rumors, and celebrity gossip and softer stories. And then we fail to understand our world or understand one another as well as we should. That has consequences for our lives and for the life of our country.”

Obama implored the journalists in the room—including the Newhouse students he had met before the ceremony began—to continue to ask tough questions and hold politicians accountable, just as Robin Toner did. “I believe that for all the sideshows of the political season, Americans are still hungry for truth, it’s just hard to find. It’s hard to wade through. The curating function has diminished in this smartphone age. But people still want to know what’s true.”

He continued: “Journalism at its best is indispensable—not in some abstract sense of nobility, but in the very concrete sense that real people depend on you to uncover the truth. Deep reporting, the informed questioning, the in-depth stories—the kind of journalism that we honor today—matters more than ever and, by the way, lasts longer than some slapdash Tweet that slips off our screens in the blink of an eye, that may get more hits todays, but won’t stand up to the test of time. That’s the only way that our democracy can work.”