Student Association and the Residence Hall Association (RHA) teamed up for the annual SU Impact Week, encouraging students to get more involved in the Syracuse community through volunteering and philanthropy. On Wednesday, March 23, Impact Week hosted a panel of community members involved in a variety of different forms of engagement, from police officers to reformed gang leaders. 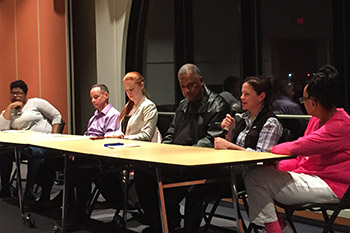 Community activists speak during an Impact Week panel urging students to get more involved in the Syracuse community.

“We solve things by engaging with the community,” says Officer Joe Cecile, deputy chief of the Syracuse Police Department. “It’s with the community that we achieve success.” Cecile sat on the panel with Glenna Price of the Rescue Mission; General Davis, a reformed gang leader; and Nancy Marshall and Bettie Graham of the Determination Center.

“Every day you want to help every person that walks through that door, but they need to help themselves first,” says Price. She coordinates and schedules all volunteers who come through the Rescue Mission, handling about 4,000 people per year. She continues, “But when you fight for something, when you work for something, and it takes, and those people come back 20 years later wanting to volunteer because of what you did for them, that’s how you win.”

Davis also understands the redemptive power of hard work. The former gang leader went to prison on gun charges, but used his time to pass the SATs, find religion and redefine his personal philosophy. After he was released, he went to Buffalo, N.Y., and began his long career of community work to combat gang violence.

“I wanted to be strong on the inside and strong on the outside before I went back to them,” says Davis, referring to the strengthening of his moral character before returning to his old friends in Syracuse. Now, he works with troubled youth at risk of gang violence, teaching them about leadership, family and morality. He’s also written two books about his experiences.

Officer Cecile also comments on leadership and duty. “With most occupations, you’re wanted. But we’re called there. We’re mandated to go. Usually one person calls us, but there are always just as many people who don’t want us there as there are who do. So, mentally, that’s very challenging.”

This idea of selflessness, of personal sacrifice for the greater good, permeated every experience shared by the panelists, and also served to inspire the students in attendance, who flooded the panelists with questions regarding how to get involved after the conclusion of the program.

RHA and Student Association offered several avenues that interested students could take, first and foremost being the newly created app Volu. Syracuse University alumnus Chris McCarthy ’09 designed the app, and its entire purpose is to connect volunteers and organizations. Students can also contact Student Association and RHA directly for more information on reaching out to local organizations directly.

Story by Austin Galovski, work-study in the Office of News Services.