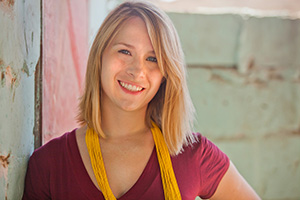 Christen Brandt ’10 counts Maheshwari as a success story for She’s the First. The young woman grew up in rural India, a member of the Dalit—the “untouchable” caste. She lived in a country where only 20 percent of women can read and write, and she appeared destined to early marriage, motherhood and a lifetime of exhausting chores.

Instead, in 2012 Maheshwari became the first in her family to graduate from high school. She attended Shanti Bhavan boarding school, a partner of She’s the First (STF), the nonprofit Brandt co-founded in 2009. Maheshwari, whose story STF tells in a short film, earned a college degree in biotechnology and genetics; now she’s in graduate school.

In a stark departure from India’s culture of arranged marriages and deference to males, Maheshwari’s brother rallied the community to raise money so she could attend graduate school. “That’s pretty remarkable,” Brandt notes. “He saw the obstacles she faced and was willing to put his earnings on the line for her education. It’s really validation that what we’re doing is working.”

Brandt, a dual major in English in the College of Arts and Sciences and magazine journalism in the Newhouse School, serves as chief programming officer for STF, traveling overseas several times a year to visit international partners and create sponsorships. She belonged to STF’s first campus chapter, which began at Syracuse University.

STF encourages girls and women to raise money to provide scholarships for girls in low-income countries. The goal is that education will open doors for first-generation high school graduates.  STF has 194 chapters at high schools and colleges.

Last year, STF passed a major financial milestone, raising $1 million. In its six-year history, STF has helped 712 scholars in 11 nations obtain 1,779 years of education. The organization’s goal is to provide 10,000 years of education to girls around the world by 2020. “I have every intention of meeting that,” Brandt says.

STF’s work, which includes an aggressive social media campaign, filmmaking and mentoring, caught the attention of the online nonprofit  Women’s ENews. The organization named Brandt and STF’s co-founder Tammy Tibbetts among its 21 Women Leaders for the 21st Century. They will be honored as “powerhouses who prepare teens for the next level” at a May 6 dinner in New York. 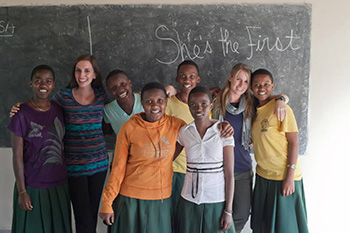 Christen Brandt, second from right, with She’s the First Scholars in Tanzania. The organization’s co-founder, Tammy Tibbetts, is second from left.

“Education is the starting block for girls,” says Brandt, who was raised by a single mother. “Without scholarships, I never would have been in college. The importance of education just rings really true to me.”

Brandt previously worked for Glamour and Parents magazines. She won a 2010 Chancellor’s Citation for her work on STF. She was recently named to the Newhouse 44, an alumni group that mentors undergraduates.

Brandt, who recently returned from three weeks in Africa, finds the girls’ stories inspirational. “When you offer someone a scholarship, you are offering them an opportunity, but you’re also asking a lot of them,” she explains. “You’re asking them to change and bear the brunt of what it means to be the first. They’re incredibly strong to do so.”