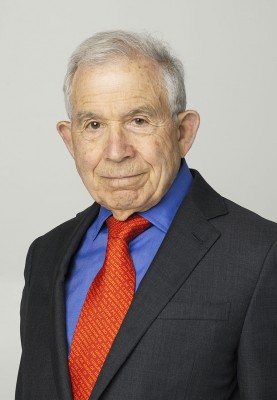 Donald Newhouse, president of media giant Advance Publications, will deliver the 2016 Commencement address at the joint ceremony for Syracuse University and the SUNY College of Environmental Science and Forestry on Sunday, May 15, in the Carrier Dome. Newhouse ’51, whose namesake has a longstanding presence on campus, will also be awarded an honorary degree, a Doctor of Letters, at the 162nd Commencement exercises.

“Donald Newhouse is an accomplished leader in the world of communications and a dedicated family man,” says Chancellor Kent Syverud. “Donald represents a legacy of excellence and a generous figure to the next generation of highly skilled journalists. Our students will greatly benefit from his words as he helps us celebrate our graduating class of 2016.”

Under the joint leadership of Donald Newhouse and his brother Samuel Irving “Si,” chairman of Advance Publications, a company founded by their father, Samuel I. Newhouse Sr., the company grew to become one of the largest family-run publishing companies in the United States. The company today owns—directly or through subsidiaries—Condé Nast Publications, American City Business Journals, the Golf Digest Companies and newspapers in more than 25 U.S. cities. Its subsidiaries also have extensive interests in cable television and Internet sites related to its print publications.

“I was delighted to be asked to speak to the Syracuse University Class of 2016. I want to share life lessons from my own personal challenges and how an education at Syracuse University, along with lifelong learning, can provide them with a strong foundation to pursue the many opportunities awaiting them and the challenges they may face,” Donald Newhouse says.

“We are honored to have Donald Newhouse for our Commencement speaker,” says Senior Class Marshal Alexis Peña ’16. “We look forward to his address, which will be another exciting part of graduation to share with family and friends.”

Senior Class Marshal Tatiana Williams ’16 is also looking forward to Commencement and hearing from Newhouse during the ceremony.

“As an alumnus and a longtime supporter of Syracuse University, Donald Newhouse knows how special this campus is to all students, past and present,” Williams says. “His presence at Commencement is another example of his commitment to our University, and I am eager to hear him address our class and provide some insights as we head out into the ‘real’ world.”

From an early age, Donald Newhouse accompanied his father on his newspaper rounds. He attended Syracuse University before taking on classified advertising and production positions at several newspapers. He was promoted in 1960 to president and general manager of The Jersey Journal in Jersey City, N.J. He took on management of Advance upon his father’s death in 1979. The company included newspapers and cable properties, including Bright House Cable and a stake in Discovery Communications.

Donald Newhouse continued his father’s commitment to the autonomy of individual newspapers, which resulted in outstanding reporting. Under his leadership, Newhouse-owned newspapers have won some of the most prestigious awards in the industry, including the Pulitzer Prize for the Portland Oregonian, the New Orleans Times-Picayune and the Newark (N.J.) Star-Ledger. He is also credited with supporting his newspapers’ efforts to attract and retain key editorial talent.

Newhouse and his family have had a long history of philanthropy through the S.I. Newhouse Foundation that includes founding gifts to establish the S.I. Newhouse School of Public Communications in 1964 and more recently the Newhouse 3 construction, along with leadership gifts to support journalists-in-training. His support and that of his family’s foundation has recognized the growing need to prepare journalists for the 21st century with a background in digital and interactive technologies.

In addition to giving generously annually to the arts, medical institutions, and schools and colleges, Newhouse has served as a director and chair of the Newspaper Association of America, which bestowed upon him its highest honor, the Katharine Graham Lifetime Achievement Award, and was a director and chair of the Associated Press. Donald Newhouse is also a lifelong honorary Trustee of Syracuse University.

A list of the other honorary degree candidates will be announced soon. For full information on Commencement 2016, visit http://commencement.syr.edu.