Symposium Speaker Will Address Diversity and Inclusion on University Campuses

Sunaina Maira of University of California-Davis will give a talk Thursday, March 24, titled “Inside/Outside: Decolonizing the Settler University.” The talk, which begins at 5 p.m. in Maxwell Auditorium, is part of the College of Arts and Sciences’ Ray Smith Symposium. This year’s symposium theme is “The Future of Graduate Education in the Humanities.” 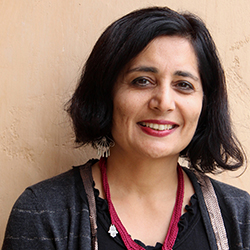 A professor of Asian American Studies at UC-Davis, Maira will talk about the issue of inclusion and exclusion on college and university campuses today. She will draw from a critique of the imperial university she developed with Piya Chatterjee in their edited book “The Imperial University: Academic Repression and Scholarly Dissent.”

“At a time in which campuses across the country, like many corporations, are giving lip service to ‘inclusion’—often without making the structural changes necessary to enacting it—engaging with the work of scholar-activists such as Sunaina Maira is crucial to helping us move in the right direction — that is, toward doing the hard, ongoing work necessary in order to produce campus communities that actually are less exclusionary, as well as societies that are less oppressive,” says Crystal Bartolovich, symposium organizer. “There are no quick fixes, and the best work on these problems doesn’t promise any. Rather, it insists that we must work at redressing the long history of racism, sexism and other institutional inequalities frankly, collectively and constantly—toward making equality and mutual respect actually prevail.”

Maira’s talk will explore instances of campus activism as well as academic repression at sites where issues of the neoliberal restructuring of the academy, academic employment, censorship and self-censorship collide. She will focus on the question of how to decolonize the imperial university from within.

Maira is the author of “Desis in the House: Indian American Youth Culture in New York City” and “Missing: Youth, Citizenship, and Empire after 9/11.” She co-edited “Contours of the Heart: South Asians Map North America,” which won the 1997 American Book Award, and “Youthscapes: The Popular, the National, and the Global.” Her new book project is a study of South Asian, Arab and Afghan American youth and political movements focused on civil and human rights and issues of sovereignty and surveillance in the war on terror.

The Ray Smith Symposium is funded by a major bequest from the estate of Ray. W. Smith ’21, administered by the College of Arts and Sciences. It is free and open to the public.