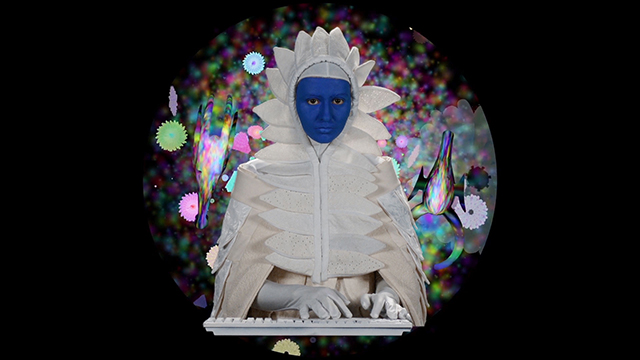 Urban Video Project (UVP), Light Work and the Everson Museum of Art are presenting dual exhibitions of work by multimedia artist Saya Woolfalk, including new video and fabric-based prints created during her Light Work 2015 UVP artist residency. Woolfalk’s work will be on view in the Everson Museum’s Cloud-Wampler and Robineau Galleries through May 1 and at Urban Video Project’s permanent outdoor architectural projection venue on the Everson plaza from April 7-May 28.

Woolfalk will give an artist talk at the Everson on Thursday, April 14, at 6:30 p.m. in conjunction with these dual exhibitions. This event is free and open to the public. Reception follows.

Woolfalk’s exhibition will be the final exhibition of “UVP 2015-16: We Were Never Human,” a year-long exploration of the changing idea of what it means to be human.

Brooklyn-based multimedia artist Woolfalk has spent nearly a decade constructing the elaborate and increasingly multifaceted fictional world of The Empathics, a race of human/plant hybrids with enhanced empathic abilities. Drawn from the realms of science fiction, biology and anthropology, Woolfalk’s Empathics inhabit a near future in which genetic mutation has produced a utopian universe characterized by widespread empathy, cultural amalgamation and fusion. Like our own world, the Empathic universe has its own distinctive imagery and mythology inspired by diverse Eastern and Western sources, including Native American baskets, Tantric paintings and Japanese weavings—and, while its civilization has evolved, its progress has also created unintended consequences and ethical dilemmas.

“ChimaCloud,” the latest chapter in the unfolding Empathic narrative, explores the ethical conundrums associated with industry and technology, even those that are used for the betterment of society. In this storyline, ChimaTEK, a corporation formed by the Empathics, wrestles with the effects of making and distributing a product that can exponentially increase the spread of empathy, but with undeniably adverse societal implications. Do the benefits outweigh the costs? Is it ever acceptable to exploit something or someone?

These questions and related discussions about environmental issues, capitalist structures and the politics of labor are at play in her video work as well as in her new works made in Syracuse: two new videos commissioned by Urban Video Project, one on view in the Everson’s Robineau Gallery and one on view at UVP’s architectural projection venue on the façade of the Everson, and prints on silk created during a residency at Light Work on view in the Everson’s Robineau Gallery. Additionally, Woolfalk presents previous pieces, including two head pieces, two “hides,” and three earlier videos (on view in the Everson’s Cloud-Wampler Gallery), providing an overview of the saga and setting the stage for the new works.

Woolfalk holds a B.A. from Brown University and an M.F.A. from the School of the Art Institute of Chicago. Born in Japan, Woolfalk grew up in Scarsdale, N.Y., and currently works in Manhattan. Her work has been shown in group shows and solo exhibitions, including at the Montclair Art Museum; the Studio Museum in Harlem; Museum of Contemporary Art, Chicago; Smack Mellon, Brooklyn; Sugar Hill Children’s Museum, N.Y.; and MoMA PS1. She is represented by Leslie Tonkonow Artworks + Projects.

Woolfalk’s residency was made possible through the generous support of Light Work and the S.I. Newhouse School of Public Communications. Her talk is co-sponsored by the Syracuse University Humanities Center and the College of Visual and Performing Arts Department of Art Visiting Artist Lecture Series. Woolfalk’s work appears courtesy of Leslie Tonkonow Artworks + Projects (NYC).