Major League Soccer (MLS) Commissioner and Soccer United Marketing CEO Don Garber is the next speaker for the University Lectures series on Tuesday, March 22, at 7:30 p.m. in Hendricks Chapel.

The event is free and open to the public. Garber’s appearance is presented in cooperation with the Department of Sport Management in the David B. Falk College of Sport and Human Dynamics. American Sign Language interpretation and Communication Access Real Time will be available. 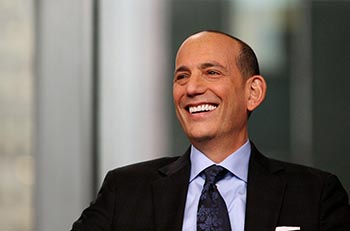 MLS launched its 21st season earlier this month. The league, which is headquartered in New York City, has 20 teams and is planning to add four more by 2018 (Atlanta United, Minnesota United, LAFC, Miami). MLS was founded in 1993 as part of the United States’ successful bid to host the 1994 FIFA World Cup. The first season took place in 1996 with 10 teams.

Through his vision and leadership, MLS has built a strong foundation for professional soccer in the United States and Canada. During his tenure, MLS has added 20 new investors, expanding and diversifying the league’s ownership group. He has also led the effort to develop soccer-specific stadiums for MLS teams. Fifteen stadiums have been built during his tenure, and two more have been renovated with soccer in mind.

In late 2001, Garber restructured MLS and spearheaded the formation of Soccer United Marketing (SUM), a company owned by MLS investors that is the pre-eminent commercial soccer entity in North America. SUM represents several prominent soccer properties, including the U.S. Soccer Federation, the CONCACAF Gold Cup and Champions League, the Mexican Soccer Federation, FC Barcelona and Chivas de Guadalajara. In addition, SUM has managed North American tours for some of the world’s most prestigious soccer clubs, including Manchester United and Real Madrid.

Additionally, Garber has implemented groundbreaking player initiatives such as the MLS Designated Player Rule and created the MLS Youth Development Initiative, positioning the league as the leader of the sport that now totals more than 24 million participants in the United States and is the largest participatory sport in Canada.

Prior to becoming MLS commissioner, Garber was the senior vice president/managing director of NFL International, where he was responsible for managing all of the NFL’s business outside the United States. He began his professional career at NFL Properties in 1984 and became the league’s director of marketing in 1988. In 1992, he was appointed the NFL’s senior vice president of business development and was responsible for a variety of television, special event and marketing activities.

He received an honorary doctor of humane letters from the State University of New York in 2010 and is an inductee of the Athletic Hall of Fame at his alma mater, the SUNY College at Oneonta.