The Humanities Center will get its groove on with back-to-back music speakers March 22-23.

On Tuesday, March 22, British-Nigerian singer Ola Onabulé will give a lecture-recital from 4-5:30 p.m. in the Peter Graham Scholarly Commons, 114 Bird Library. In a program titled “A Global Journey Through the Arts,” the chart-topping R&B artist will discuss his career as a globe-spanning performer and music executive, while interspersing his talk with brief vocal selections. His talk, which includes a Q&A session, will be moderated by James Gordon Williams, assistant professor of African American studies.

The following day, hip-hop activist Harry Allen (a.k.a. “The Media Assassin”) will present “Shooting the Enemy: My Life in Pictures with the People Who Became P.E. (Public Enemy)” from 7-8:30 p.m. in Watson Theater. Theo Cateforis, associate professor of music history and cultures, as well as chair of the Department of Art & Music Histories, will moderate the program, covering Allen’s involvement with one of the most critically acclaimed hip-hop acts of all time.

Both events are free and open to the public. For more information, contact the Humanities Center, which is based in the College of Arts and Sciences, at 315-443-7192 or visit http://syracusehumanities.org.

“To have not one, but two distinguished artist-scholars on campus the same week is a special privilege,” says Vivian May, director of the Humanities Center and associate professor of women’s and gender studies. “Both speakers will pull back the curtain on the music industry, providing a glimpse into how things work onstage, backstage and in the studio. Just as importantly, they will address the social and cultural significance of their respective art forms.”

Both events are designed to appeal to a wide array of students, including those interested in music history, African American studies, creative industries management (e.g., arts leadership, arts journalism and audio arts), and music performance. 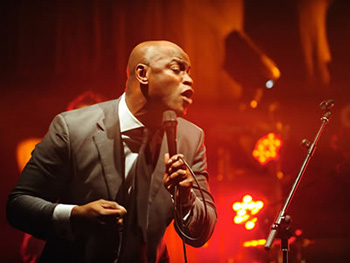 British-born, Nigerian-raised Onabulé has carved out a niche for himself as a singer-songwriter, fluent in jazz, R&B and world music, while acknowledging a debt to the great soul singers of the 1960s and ’70s. Following up on the U.K. success of a remix of his 2005 single “Soul Town,” he is currently promoting his eighth studio album, “It’s the Peace That Deafens.” The album is something of a departure for Onabulé, with its largely acoustic treatment of songs about identity, reconciliation and nostalgia.

“It’s as much a work of exploration as it is a declaration,” says Onabulé, a finalist for a United Nations Educational, Scientific and Cultural Organization (UNESCO) Honorary Ambassadorship to Nigeria. “The melodies and rhythms walk a delicate tightrope of paradoxes, born of both a childhood and adulthood immersed in two disparate cultures, on two different continents and at two different times.”

A fixture on the international festival circuit, Onabulé regularly appears with some of Europe’s leading orchestras and big bands, including the Grammy Award-winning WDR Big Band Cologne. He also runs his own label, Rugged Ram Records, which is distributed by Dot Time Records in the United States and Europe, and endorses Neumann microphones and ACS in-ear monitors.

He will also perform on Sunday, March 20, at 5 p.m. at the Sheraton Syracuse University Hotel, as part of CNY Jazz Central’s 20th anniversary season. For tickets or more information, call 315-479-JAZZ or visit http://cnyjazz.org.

Allen, whose March 23 lecture is part of a two-day residency at Syracuse, is a legendary social activist, journalist, D.J. and photographer. In addition to publishing his own blog, he writes about race, politics and culture for VIBE and The Source magazines, The Village Voice and other national publications. 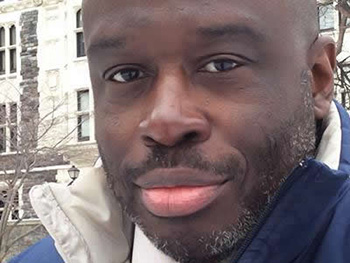 Most people know Allen for his long-time association with Public Enemy, the Long Island band whose politically charged brand of hip-hop shot to the top of the charts in 1980s and ’90s. It’s Allen who has a “cameo” on the band’s 1988 single “Don’t Believe the Hype” and in the 1991 documentary “Tour of a Black Planet.”

A gifted scholar, Allen is producer and host of “Nonfiction,” a weekly magazine of contemporary arts and issues on WBAI-FM in New York City, and serves as an advisor to the Archives of African American Music and Culture at Indiana University. He also has worked as a public relations consultant, specifically in the area of crisis communication, for Rockstar Games. Allen is currently writing a book about architectural design in computer and video games.

“That African Americans are alienated from technology is a myth,” Allen told Wired magazine. “There is far more evidence showing quite the opposite. When useful technology is not kept from us by white people who practice racism, or when it is not used to oppress us, we usually find energetic ways to get a new maximum out of it. Additionally, I say that the power of hip-hop lies in its ability to radically combine sounds, imagery, text and other media within its form.”

His lecture is co-sponsored by the departments of Art & Music Histories and African American Studies, as well as the Humanities Center; the Student Association’s Co-Curricular Fee Fund; and the Bandier Program in the Setnor School of Music in the College of Visual and Performing Arts.

Allen will also deliver the Bandier Program’s Soyars Leadership Lecture on Tuesday, March 22, at 6:30 p.m. in the Marvin and Helaine Lender Auditorium in the Whitman School building. The lecture is free and open to the public.