College of Visual and Performing Arts senior Markova Casseus has used her Communications and Rhetorical Studies major as a springboard to launch herself into the world of professional opportunity. Casseus is involved in a variety of on-campus organizations, all supporting her overall goal of becoming an executive producer for her own television network. Whether it’s getting active through performances with the Black Reign Step Team, or hosting alumni panels at Newhouse with the Black Communications Society, Casseus maintains a balanced, motivated lifestyle that puts her on the path to achieving her long-term career ambitions.

Walk us through a day in the life. You’re involved in a lot of things, so how does that shape up when you’re figuring out your schedule? 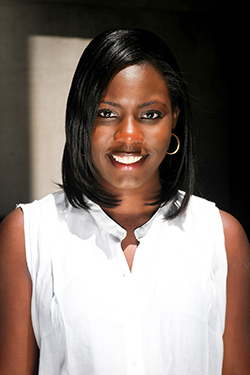 I start every day with a workout. It gets me active and in the right mindset for the day. I’m in a cardio fitboxing class, which I think is a very cool way of doing it. It makes me feel like I’m in a music video, and gets me motivated immediately. From there, I go to a public speaking class. I know I’m a fast talker, so that’s helping me slow it down. I obviously want to be involved in television production, so it’s good that I found a way to work on that skillset. It’s a great way to challenge myself, to make me get better. VPA also offers a music industry class that I’m taking right now, which gives all of us the opportunity to get hands-on campaign experience. For example, right now we’re building a business plan for a business that we created ourselves. Before that, we were hired by a startup to do market research identifying up-and-coming trends in the music industry. One of my mentors works in the music publishing and licensing business, so she was able to help with that one. I actually met her through the fullCIRCLE Mentoring Program here at Syracuse.

Tell me more about fullCIRCLE. How did you get involved in it, and what are some of its functions?

The fullCIRCLE Mentoring Program is run through the Office of Multicultural Affairs. When I first joined, I got a mentor, and through the years I’ve gone on to take mentees of my own. You also get more than one mentor or mentee. That way, for underclassmen, they have someone on campus to help them get acclimated. But for juniors and seniors, the focus shifts to career development and networking, so they’re paired with someone already in their intended field. Right now, I hold a position where I essentially serve as the liaison between the staff, and the mentors and mentees.

What other extracurriculars are you involved in?

First and foremost, I’m involved in the Black Communications Society, which is an organization within the S.I. Newhouse School of Public Communications. I joined last semester, and I currently hold the position of project coordinator. Most recently, I hosted an alumni panel event. It was an amazing experience to take that type of event from start to finish. I contacted the alumni, worked with agents, coordinated with the Office of Program Development, and it all finally culminated in this fantastic event where women from the communications industry spoke with students about their different career paths and the opportunities that Syracuse University provides.

I’m also a member of Lambda Pi Eta, which is an honor society run through the Communications and Rhetorical Studies Department. You need to be at least a junior to join, and I became an initiated member last spring. The whole idea is to facilitate increased involvement in the program for younger students, and show them the opportunities at their disposal.

Finally, I’m on the Black Reign Step Team. It was founded in 2005 and is the only non-Greek step team performing on campus. I love doing it; I can explain it simply as I have a great time doing fun stuff with my feet. Within that organization, I’m on the public relations committee. My whole mindset with that was to help other campus dance groups promote their shows, in the hope that it would create a stronger performing arts community on campus. I’m also on the budget committee, working on the logistics of our annual show.

You’re a senior now. What are your ambitions post graduation?

I’m a McNair Scholar, and the mission behind that program is getting minority students to pursue higher education. And by higher education, they mean graduate degrees as well as undergraduate. So right now I’m in the process of applying to grad school, and I’m actually looking at some one-year programs, so hopefully this time next year I’ll be getting ready to receive another degree.

But looking at the bigger picture, I want to go into production. I want to be an executive producer, to start my own channel. I want to have my own thing. If I could create any type of television show, it would be a reality show that focuses on the lives of the college generation. We get a bad rep as millennials, but we’re doing so much. If we could have an outlet to voice what we are, and show what we care about, that would be incredible. Just looking at myself, I can say that I’ve taken every opportunity Syracuse has given me. I feel fortunate to be in the spaces I am, to work on the projects I’ve worked on. I’ve really made a difference, and I know that I can do anything that helps other people. In the end, that’s what makes it worthwhile to me, and I love that Syracuse has given me that opportunity.

Story by Austin Galovski ’16, work-study student in the Office of News Services