Former Secretary of State Madeleine Albright to Speak at Hendricks 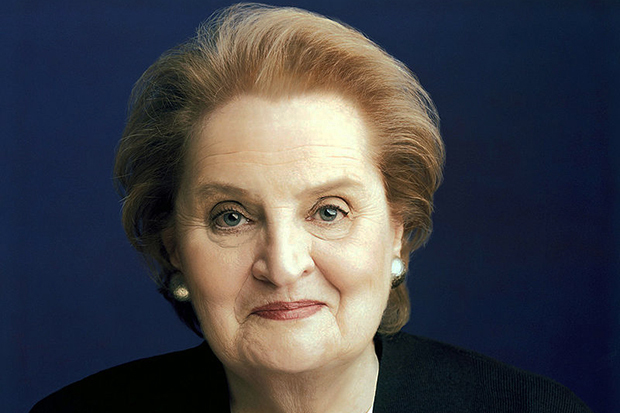 Madeleine K. Albright, former U.S. Secretary of State (1997-2001), will deliver the next Tanner Lecture on Ethics, Citizenship and Public Responsibility at the Hendricks Chapel. Albright, who received the Presidential Medal of Freedom, the nation’s highest civilian honor, from President Obama in 2012, will discuss her 40-year career in international affairs as well as current threats and challenges in U.S. foreign policy. She will be joined in conversation by James B. Steinberg, dean of the Maxwell School and former Deputy U.S. Secretary of State (2009-2011).

The event will take place on Tuesday, April 5, at 3 p.m. in Hendricks Chapel. The lecture is free and open to the public; RSVP is strongly recommended here. The event will also be available via livestream at http://www.ustream.tv/channel/maxwellsu.

In 1997, Albright was named the first female secretary of state and became, at that time, the highest-ranking woman in the history of the U.S. government. As secretary of state, Albright reinforced America’s alliances, advocated for democracy and human rights, and promoted American trade, business, labor and environmental standards abroad. From 1993 to 1997, she served as the U.S. permanent representative to the United Nations and was a member of the president’s Cabinet.

Prior to her service in the Clinton Administration, she served as president of the Center for National Policy, a member of President Jimmy Carter’s National Security Council and White House staff, and served as chief legislative assistant to U.S. Senator Edmund Muskie.

Albright is chair of Albright Stonebridge Group and chair of Albright Capital Management, an affiliated investment advisory firm focused on emerging markets. She is also a professor in the Practice of Diplomacy at the Georgetown University School of Foreign Service. She chairs both the National Democratic Institute for International Affairs and serves as president of the Truman Scholarship Foundation. She is also on the U.S. Department of Defense’s Defense Policy Board, a group tasked with providing the secretary of defense with independent, informed advice and opinion concerning matters of defense policy. Albright also serves on the boards of the Aspen Institute and the Center for American Progress. In 2009, Albright was asked by NATO Secretary General Anders Fog Rasmussen to chair a group of experts focused on developing NATO’s new strategic concept.

Albright earned a B.A. with honors from Wellesley College and holds master’s and doctorate degrees from Columbia University’s Department of Public Law and Government, as well as a certificate from its Russian Institute.

The Tanner Lecture Series on Ethics, Citizenship and Public Responsibility provides a public forum for exploring questions about ethical citizenship in provocative and challenging ways. The series has been generously endowed by alumnus W. Lynn Tanner ’75 PhD, founder, CEO and chairman of TEC Canada, a leadership development organization dedicated to accelerating the growth and development of outstanding 21st-century leaders. The lecture series is coordinated by the Campbell Public Affairs Institute at the Maxwell School.