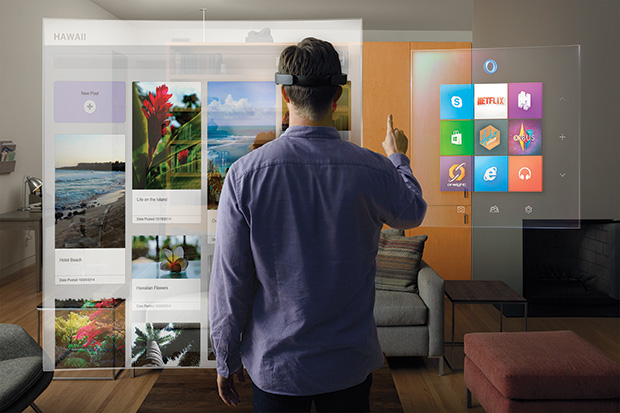 As the first school of communications to launch a virtual reality storytelling course tailored to journalists and television and film producers, the Newhouse School is poised to expand into the exciting new medium of augmented reality. That opportunity will come early next month, when the school will become a wave 1 tester of Microsoft HoloLens, a futuristic visor that brings 3D holograms to life within the wearer’s world.

Dan Pacheco, Peter A. Horvitz Endowed Chair in Journalism Innovation at the school, submitted the school’s HoloLens application. “Our goal is to have our students, many of whom are already versed in using Unity and 3D modeling software, use HoloLens to create compelling, immersive stories and data visualizations that people can experience while walking through their living rooms.”

Unlike virtual reality, which tricks users’ brains into thinking they’re somewhere else, HoloLens creates the illusion that 3D objects and avatars are in the same room as the user. Pacheco had the opportunity to test HoloLens last summer, thanks to alumnus Larry Hyrb ’89, director of programming of Xbox Live. Pacheco described his HoloLens experience for MediaShift’s Idea Lab.

Pacheco submitted the HoloLens application along with Ken Harper, associate professor of multimedia photography and design, who hopes to use the device for projects at the Newhouse Center for Global Engagement, which he directs. “The potential that HoloLens possesses to connect storytellers, users and the complex issues of our world is amazing,” says Harper. “I can’t wait to get started.” 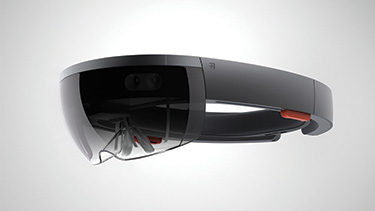 But, Pacheco says, “As cool as the tech is, it’s not going to mean anything if it doesn’t deliver compelling information and stories that matter to people. Storytelling is what we teach at Newhouse, and I’m excited at the prospect of our students graduating with a hands-on understanding of how a story unfolds through 3D models in your living room.”

HoloLens will supplement the Newhouse School’s burgeoning expertise in virtual reality storytelling. Thanks to the leadership of Newhouse Dean Lorraine Branham, the equipment space at Newhouse (affectionately known as “the Cage”) is now stocked with eight 360 video camera rigs built by Pacheco, Harper and graduate student Aron Nah. Industry leaders have also taken notice and have expressed interest in hiring Newhouse students to join their virtual reality teams.

“From broadcast television to mobile media, Newhouse has historically invested in new frontiers in communications,” says Branham. “We are proud to continue that trend with virtual and augmented reality, and I’m delighted to see that the students who are learning these skills are already seeing an advantage in the job market.”

In addition to supporting student storytelling, Pacheco and Harper hope to use HoloLens to create mixed reality applications that help people at all levels of scientific knowledge understand the complexities surrounding climate change. “We will focus on narrative, data-driven stories that address the human psychology of long-term risk, and stories that evoke empathy to help people relate to complex scientific ideas,” says Pacheco. For example, a user could experience weather phenomena as realistic 3D models with audio explainers of the underlying science behind increasing storm frequency and severity, or get a first-person view of what projected sea level rise means for coastal cities.

“What will it mean when every living room or office can be operated as a museum-like exploratory space? And how do you impart information in a way that hasn’t been possible before? It’s very exciting. Our students really are living in the future, and they will be the ones who answer these questions,” says Pacheco.