Terry J. Jones ’16, a film student in the College of Visual and Performing Arts, has pursued his passion around the world. From collaborative documentaries to creative films, Jones is the purest form of storyteller. After growing up on a reservation, the Native American student has been an ambassador of his culture, both through his filmography and as an officer of the Indigenous Students at Syracuse (ISAS). Jones offers his insight on pursuing your passion and remaining true to yourself, all while overcoming the various hurdles of both the film industry and the inherent bias that all native students are faced with. 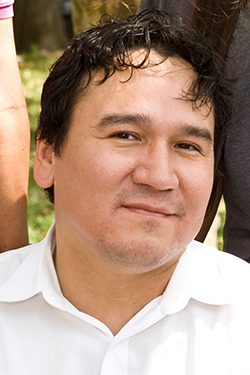 How did you incorporate study abroad and off campus into your filmmaking major?

During the prior two semesters, I was studying away from the Syracuse University main campus. During the 2015 spring semester, I studied abroad in the Czech Republic at the Film and TV School of the Academy of Performing Arts in Prague (FAMU), studying 35mm filmmaking. This is a film program offered to juniors majoring in film at VPA. In the 2015 fall semester, I participated in SU’s Los Angeles Semester program. This semester-long program included full-time coursework on the SU Los Angeles campus, along with a part-time internship within the entertainment industry.

Returning this semester as a senior has allowed me to adjust to being back on main campus. I am striving to find a balance between completing my final film and honors courses, as well completing my senior thesis documentary film. My thesis film project is titled “Indian,” and it shows what happens when two Indian filmmakers, one from southern India and the other from an Indian reservation in western New York State, visit each other’s homeland.

How did you become so interested in film, and how has SU helped shape and support those interests?

Photography and filmmaking had always interested me since I was a young adult, and I never thought I was good enough to pursue either one of those professions. Growing up on an American Indian reservation did not offer an aspiring “image taker” many role models to emulate. In high school, I felt like I was cursed for not finding a nurturing environment for an unconventional thinker who saw the world differently. That all changed when I transferred into the film program at Syracuse University in 2012.

You’ve created a variety of films. How does your creative approach differ based on the type/style of film, and which do you enjoy the most?

I have come to see myself as an educator and historian of Haudenosaunee culture through film and digital media. The overall objective of my film works is to not only entertain my audiences but to educate them as well. Many of the characters in my film projects tend to be Native American. I’d like to think that my film works help defy stereotypes by making sure the narrative and characters are thought out and relatable to everyone. In essence, I’m striving to humanize the “other.”

You have served as writer, director, videographer, producer—basically everything. What are the advantages and disadvantages of that approach?

For me, the film program within VPA is extremely comprehensive and challenging. Our coursework includes studying the theoretical and practical approaches to art and filmmaking. We learn by doing. While working on class projects, we find elements of filmmaking that interest us and the process allows us develop our talents. In the real world, no one is capable of performing all facets of filmmaking by themselves (i.e., scriptwriting, producing, directing, editing, cinematography), so the program encourages collaboration. Fortunately for me, I was lucky enough to find a fellow filmmaker and collaborator (Govind Deecee) whose interests and approach to filmmaking match my own. We find narrative themes that interest us and we develop characters and situations that will help us convey our film’s message.

You’re also very involved in ISAS. How did you become interested in that organization, and what is your role there now?

As a non-traditional Haudenosaunee Promise Scholar at Syracuse University, I am part of the indigenous population on campus. Initially, every student needs to adjust and adapt to his or her new life away from home. Indigenous students tend to experience challenges separate from the general student population. Many of these students travel from their home reservations or territories, and Syracuse may be their first personal experience with the outside world.

At Syracuse University, the Native Student Program and the Indigenous Students at Syracuse student organization (ISAS) are vital support systems available for the indigenous student population. During my first semester at Syracuse, I attended an ISAS meeting. Being in the company of younger and equally determined Native students, they inspired me to get involved within both programs. At the beginning of my sophomore year, I was elected to serve as president of ISAS. One of our greatest challenges was educating the student body that there were actually native students on campus; Native students at Syracuse University are 0.6 percent of the general student population. Highlights of our accomplishments during my tenure as president included planning an event for Columbus Day. Rather than accentuate the growing sentiment to protest this day, the ISAS students chose to celebrate indigenous survival by congregating on the Quad and distributing flyers with information about native demographics, health and education. We ended the event by inviting everyone to join in a native social dance on the quad. The planning and execution of this event allowed the ISAS students to bond and appreciate the results of teamwork.

Where do you see yourself after graduation?

After I complete my bachelor’s degree, I intend on pursuing a master’s degree in film studies in the fall of 2017. Eventually, I want to be an accomplished filmmaker and a professor of indigenous media studies. Like many other native communities, my home territory is confronted with many issues that negatively impact our quality of life (loss of language, drug abuse, diabetes, environmental dangers, public safety and injustice). It is my hope that my future film projects will bring awareness to our struggles, which will promote and facilitate dialogue that can influence changes in public policy on my home territories and the federal level.

As a non-traditional student with life experiences beyond those of my fellow classmates, I realized that I took a huge risk when I decided to attend Syracuse University. Upon my acceptance, I assumed that with such a large student population, there would be other non-traditional film students within my program. On my first day of classes, I was the only freshman who hadn’t just graduated high school. What have I learned since my first semester at Syracuse? Although I won’t answer the most-asked question of “How old are you?”, I’m slowly being defined as “Terry,” rather than by the number of times I have revolved around the sun. At times, I am the only native student in my classes, which makes me a sort of ambassador not only for myself but also for my culture. For me, I learned that college the second time around has been just challenging and fun. I realized that throughout my life all I wanted and needed was an opportunity, and my time at Syracuse has been a gift. I have learned that I am competitive when it comes to academics. My time is now. I may be late to the academic party, but I also come bearing gifts to share.

Story by Austin Galovski ’16, work-study student in the Office of News Services