914Works will present work by artist Tom Hall in the exhibition “It Could Be Paradise, but It’s Only California” March 10-31. An opening reception will be held on Thursday, March 10, from 6-8 p.m. 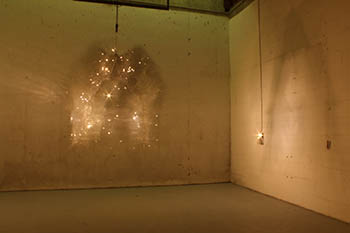 An image from Tom Hall’s exhibition

In “It Could Be Paradise, but It’s Only California,” Hall takes on the role of frontiersman to immerse himself into a new, wild world that he recently moved to from England and where he has built himself the basics to survive.

Hall’s journey takes a fresh look at the American myth. In the exhibition, he points to the false romantic past propagated by former President Theodore Roosevelt in his book, “The Winning of the West,” which romanticizes the reality of the wild frontier; actor and former President Ronald Reagan living out a cowboy dream in the movies; and former President George W. Bush referencing the West and “Wanted, Dead or Alive” posters in remarks following 9/11.

A resident of Syracuse, Hall graduated from London’s Wimbledon School of Art in 1994 with a degree in sculpture and subsequently completed an M.A. at London’s Royal College of Art in 1998. His work has been exhibited in national and international shows since 1994, including exhibitions at Trinity Buoy Wharf, London; Les Tombées de la Nuit arts festival in Rennes, France; Crawford School of Art, Cork, Republic of Ireland; and commissions for Bournemouth Arts by the Sea Festival and a large roundabout for Eastbourne Council. Learn more at http://www.tomhall-artist.com.

914Works is part of the College of Visual and Performing Arts. For more information, email 914works@syr.edu.