Kierna Mayo, editor-in-chief and vice president of digital content for Ebony, will visit the Newhouse School March 8 as a guest of the Leaders in Communications Lecture Series. She will speak at 7:30 p.m. in the Joyce Hergenhan Auditorium, Newhouse 3. 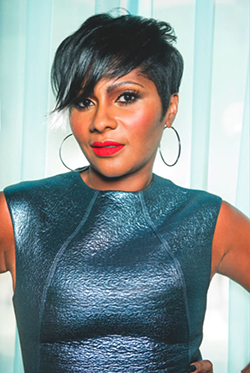 Mayo oversees Ebony’s editorial direction and maintains the Ebony brand across all platforms. She joined Johnson Publishing Co. (which publishes Ebony) in 2011 as digital editorial director, and led the rebranding of Ebony.com. Following its launch, Ebony.com was named a 2012 “magazine brand to watch” by Advertising Age. The site also won a National Association of Black Journalists Salute to Excellence Award in the digital category, and was a finalist in the Best of the Web Awards competition, both in 2013.

Mayo has been named to The Root 100 List of Top Influencers and The Folio: 100 list of media leaders.

She began her career as a hip-hop journalist and went on to become the co-creator and founding editor-in-chief of Honey magazine. She also held positions as creative consultant for Black Entertainment Television/Viacom, editorial director of Tyra.com and senior editor of CosmoGirl. Her writing on the intersections of race, women and culture has appeared in publications including Essence, Vibe and Marie Claire, among others.