David Droga, founder and creative chairman of Droga5, will visit the Newhouse School Monday, Feb. 29, as a guest of the Eric Mower Advertising Forum. He will speak at 5:10 p.m. in the Joyce Hergenhan Auditorium, Newhouse 3. Follow on Twitter at #MowerForum. 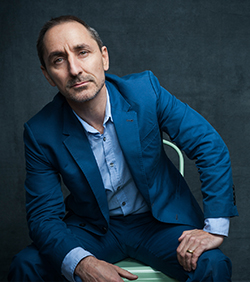 Droga5 is a creative and strategic agency headquartered in New York with an office in London. Founded in 2006, Droga5 has been named Agency of the Year nine times. It is the only agency to appear on the Advertising Age A-List over six consecutive years and one of the few agencies to be named one of Fast Company’s World’s Most Innovative Companies.

To date, he is the most awarded creative at the Cannes International Festival of Creativity and the youngest person ever inducted into the New York Art Directors Club Hall of the Fame. He is also a laureate of the Asian Media and Marketing Hall of Fame, the AdNews Hall of Fame, the AWARD Hall of Fame and the American Advertising Federation Hall of Achievement. Last year, Adweek named Droga one of the top 100 most influential leaders in marketing, media and technology.

Beyond his family and advertising, Droga’s favorite topics are the arts, all sports, the environment and anything Australian.