Novelist and short story writer Joy Williams, the Richard Elman Visiting Author, will give the next reading in the Raymond Carver Reading Series on Wednesday, March 2. 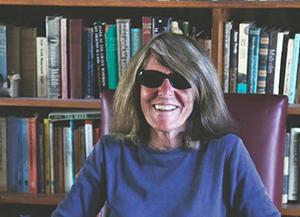 Williams is the author of “The Visiting Privilege: New and Collected Stories” (Knopf 2015). She also has written four novels—the most recent, “The Quick and the Dead,” was a runner-up for the Pulitzer Prize in 2001—and three other collections of stories, as well as “Ill Nature,” a book of essays that was a finalist for the National Book Critics Circle Award. Among her many honors are the Rea Award for the Short Story and the Strauss Living Award from the American Academy of Arts and Letters. She was elected to the academy in 2008. She lives in Tucson, Ariz., and Laramie, Wyo.

In a Sept. 2, 2015, story in The New York Times, Dan Kois said of Williams, “Her three story collections and four darkly funny novels are mostly overlooked by readers but so beloved by generations of fiction masters that she might be the writer’s writer’s writer.” He quoted Syracuse University English Professor George Saunders as saying, ‘‘She did the important work of taking the tight, minimal Carveresque story and showing that you could retrofit it with comedy, that particularly American brand of funny that is made of pain.’’