Associated Press correspondent Kathy Gannon is the recipient of the 2015 Tully Free Speech Award. Presented by the Tully Center for Free Speech in the Newhouse School, the award honors journalists who have persevered in the face of threats and other obstacles to free speech. 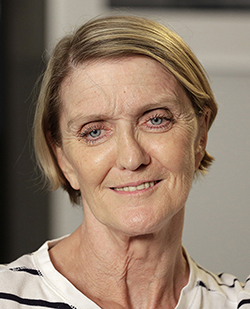 Gannon will receive the award at a ceremony on Monday, March 7, at 7 p.m. in the Joyce Hergenhan Auditorium, Newhouse 3. Follow on Twitter at #TullyAward.

“Kathy Gannon’s courage and dedication to reporting exemplifies the values we hope our students and future journalists will embody,” says Roy Gutterman, associate professor and director of the Tully Center. “I have met Kathy and know she will share some important stories with us.”

Gannon serves as the AP’s senior correspondent for Pakistan and Afghanistan, having covered the region since 1988. Her time there has included the withdrawal of Russian soldiers from Afghanistan, the assassination of Benazir Bhutto, the Afghan civil war and the rise and fall of the Taliban. Gannon was the only Western journalist allowed in Kabul by the Taliban in the weeks preceding the 2001 U.S.-British offensive in Afghanistan.

In April 2014, Gannon was seriously wounded while covering preparations for Afghan national elections when an Afghan police officer opened fire on her car. Her colleague and close friend, AP photographer Anja Niedringhaus, was killed in the attack.

In addition to her coverage of South Central Asia, Gannon has covered the Middle East, including the 2006 Israeli war against Hezbollah in southern Lebanon, and war in northern Iraq.

A native of Canada, she was previously the city editor at the Kelowna Courier in British Columbia and worked at several Canadian newspapers. She is the author of “I is for Infidel: From Holy War, to Holy Terror in Afghanistan,” an examination of the Taliban and post-Taliban period.

Endowed by the late Joan Tully ’69, the Newhouse School’s Tully Center educates students and the public about the important value of free speech through education, resources and research. As part of her bequest, Tully asked that an award be given to honor a journalist who has shown courage in facing a free speech threat. The awardee visits Syracuse University for several days to be honored at an award ceremony, accept a cash award and visit classes across campus.