As a producer, editor and director at the American Forces Network (AFN), Newhouse School alumnus Patrice “Rock” Grant has the job of his dreams. 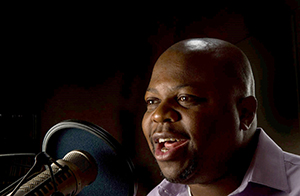 Grant first came to Newhouse as part of the Military Visual Journalism program, which he completed in 1997. He later earned a bachelor’s degree in television, radio and film in 2005.

Through his work with AFN, an eight-channel network dedicated to bringing entertainment, news and sports to American troops overseas, Grant has interviewed some of the biggest celebrities in Hollywood and attended awards shows like the Oscars, MTV Music Awards and San Diego Comic Con, recording messages for military personnel.

He was interviewed by Sophia Melissa Caraballo Piñeiro, a graduate student in the magazine, newspaper and online journalism program at the Newhouse School.

Tell me a little bit about your time at Newhouse.

I was one of 12 military members selected to attend the Newhouse program. Back then, it was the premier advanced program for Air Force Combat Camera. I truly loved my time at Syracuse because it challenged me and gave me a chance to earn my degree. The SU professors really pushed us technically and creatively. We get trained in the military, but the Newhouse program really helped me with my producing skills, especially writing. I remember long nights writing news packages, shooting, editing and studying for Comm Law exams. I enjoyed every moment because I knew this was what I needed to better my craft. Having classes with non-military students added to the overall experience because we had a chance to collaborate, share ideas and learn from each other. Newhouse definitely made me a better storyteller.

Talk about some of the experiences you had in the Air Force.

I was in the Air Force for 10 years. I feel really blessed because I’ve had so many great opportunities and met so many wonderful people from around the world. I’ve worked with real rocket scientists, documented joint military operations and interviewed Tuskegee Airmen. The Air Force also gave me the chance to travel overseas and throughout the United States. To experience other cultures really enlightens you to the fact that people are generally the same. We have more in common than you think.

What is your current position and what do you do?

Currently, I’m a producer-editor for AFN. I work in marketing and promotions, so my job is to produce content for on-air broadcast and social media. We attend major Hollywood events. We also get special access to the sets of popular shows on television. This is all in an effort to get interviews from celebrities. We use the interviews not only to promote upcoming programming on AFN, but it also serves as a morale boost to our military. Just imagine stars like Brad Pitt, Angelina Jolie, The Rock, Halle Berry or Sam Jackson giving a heartfelt message to the military. AFN has covered it and sent those messages to the military overseas. It’s great to meet celebrities and have them share their love and gratitude for the military. My reward comes in the knowledge that I had something to do with providing a “slice of home” to my brothers and sisters in uniform. AFN is the only consistent connection the military has to the States, and sometimes it’s the only thing that connects the military to their families at home. That’s why AFN’s mission is so important.

How did Newhouse prepare you for the job you have now? 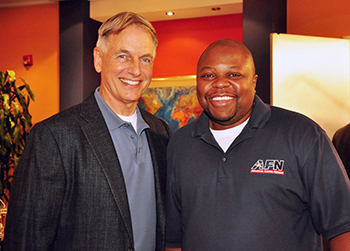 Newhouse really taught me how to become a better communicator and manager of time. This is a critical skill to have as a producer, director and editor because time is the only variable we rarely get more of in production. The Newhouse program also helped me pay closer attention to detail in every phase of production. I’m constantly writing and re-writing, looking at framing and lighting and finalizing spacing and camera angles with talent. Lastly, Newhouse is partly responsible for me becoming a better collaborator. Working at AFN propels you into the fast-paced world of news and entertainment, especially in our marketing and promotions division. There are tons of moving parts and no one can do it alone. It takes a team of people, strategic planning and savvy know-how to create successful marketing campaigns. You will definitely learn how to collaborate and work efficiently with the education and training you get at Newhouse.

Do you have any advice for current Newhouse students who want to follow your career path?

Develop a clear vision and then network, network, network! Listen to wisdom and always remain teachable, no matter where it comes from. It will save you lots of time, energy, heartache and pain. Surround yourself with smart, creative people because their positive qualities will rub off on you. Be bold but also humble. Learn to be flexible because sometimes opportunity comes in ways you never imagined. Always remember there’s a difference between compromise and settling. Settling is never okay. Help others when you can. Have fun. Lastly, remember most people want to help you achieve your dream, so it’s important not to be a jerk.