The Campus Accountability and Safety Act combats sexual assault on college campuses by transforming the way that colleges and universities deal with these crimes. This legislation would professionalize the response to and reporting of sexual assaults that occur on campuses to better protect and empower survivors of campus sexual violence, while also protecting the rights of accused students.

“Syracuse University has long been a national leader in combating sexual violence,” says Syracuse University Chancellor Kent Syverud. “I am fortunate to work with a dedicated team of student, faculty and staff leaders who strive to make Syracuse a safe campus, and be ahead of the curve in working to prevent sexual assault. As Chancellor of one of the largest private universities in New York State, I know more work on this critical issue is needed.  That is why I support Senator Gillibrand’s Campus Accountability and Safety Act.” 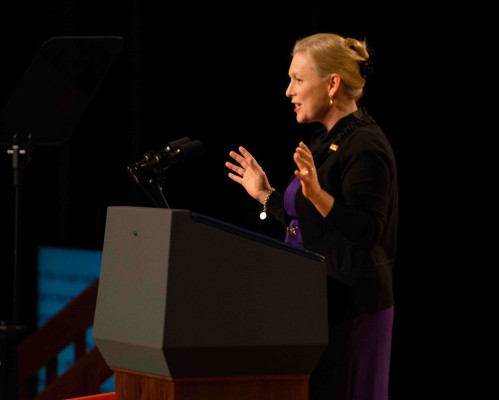 “Sexual assault on college campuses is too often swept under the rug,” says Senator Gillibrand. “The bipartisan Campus Accountability and Safety Act will help address this pervasive problem and make college campuses across the country safer and more accountable. I am grateful that Syracuse University has added their name in support of this critical legislation, and I will continue fighting to get this comprehensive, bipartisan bill passed to ensure campus sexual assault cases are handled with the professionalism and fairness students deserve.”

The Campus Accountability and Safety Act would create new incentives to better protect students and professionalize the response to and reporting of sexual assault. The legislation incorporates input from survivors, students, colleges, universities, law enforcement and advocates to do the following:

In March 2015, Senator Gillibrand met with students and officials from Syracuse University, as well as survivors, advocates and law enforcement officials to discuss bolstering efforts to combat sexual violence on college campuses.

Senator Gillibrand also joined Vice President Joe Biden L’68 at Syracuse University in November 2015 as part of the “It’s On Us” campaign’s National Week of Action to raise awareness about campus sexual assault.

Syracuse University has continued to build on its work in preventing and addressing sexual assault and relationship violence with the establishment of the Chancellor’s Task Force on Sexual and Relationship Violence, whose members were appointed in April 2015 by Chancellor Syverud. This followed a recommendation by the Chancellor’s Workgroup on Sexual Violence Prevention, Education and Advocacy.

A number of the original workgroup’s recommendations were instituted by the Division of Student Affairs; Equal Opportunity, Inclusion and Resolution Services; Department of Public Safety; and many other student, faculty and staff groups. Some of the new efforts include creating new support groups; signing on with the White House’s “It’s on Us” campaign; organizing educational programs and events around the subject of informed consent; and providing detailed information to faculty, staff and students about Title IX.

The Chancellor’s Task Force is committed to looking critically at the University’s policies and programs regarding sexual assault and relationship violence, exploring and developing new educational initiatives for prevention, and examining the best ways to communicate with the University community about services, support systems and enforcement efforts.

The Campus Accountability and Safety Act is co-sponsored by a bipartisan coalition of 34 senators. The SUNY system, Southern Oregon University and Daemen College have endorsed the legislation.