Syracuse University’s recent research success, the budget planning process, the Campus Framework and the Climate Assessment Survey were among a handful of topics Chancellor Kent Syverud addressed during his University Senate appearance Wednesday afternoon. Speaking in front of the University’s governing body, the Chancellor began his address remembering Britny Kabic, a sophomore in the S.I. Newhouse School of Public Communications who passed away unexpectedly last Friday.

Below are the Chancellor’s remarks as prepared for the University Senate meeting: 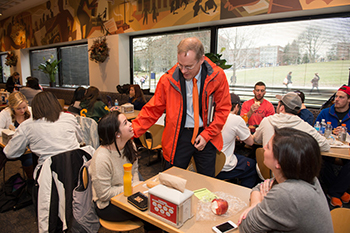 I am pleased to be with you today. I would like to provide you with an update on a few items and address a question raised at the January meeting.

I’ll provide you an update on our new research rating and the physics announcement; a brief budget planning overview; progress on executive searches; an update on Campus Framework; and the new climate assessment survey.

First, I want to take a moment to acknowledge the loss of a member of our community, Syracuse University student Britny Kabic. Britny was a sophomore advertising major, a member of the Delta Delta Delta sorority, a “bowling rockstar,” and most importantly one of our students. As the Daily Orange Editorial Board wrote on Monday, “like many of us, Britny Kabic shared an online photo of her acceptance letter to Syracuse University in December 2013 with the caption expressing that she had never been happier in her life. And like us, her life should not be quickly mourned and easily forgotten.”

Britny’s family is from Hatboro, Pa., north of Philadelphia. On Monday my wife Ruth and I, along with Dean Lorraine Branham, were able to meet her parents, Stacy and Jack, and we continue to keep them in our thoughts and prayers.

The family was assisted by many SU staff, students and faculty. From the Department of Public Safety, FIXit, the Office of Residence Life, the Counseling Center and many others, we will continue to lift up our student community and their families.

Last week was a great week for all those who care about research at Syracuse.

Syracuse University has moved into the top tier for research activity among all doctoral universities in the nation, according to the recently released 2015 Carnegie Classification of Institutions of Higher Education.

In the new rankings, which are issued twice a decade, Syracuse moved from an R2 designation in 2010, denoting a “higher research activity,” to an R1 designation, which is the top research class a university can be awarded. The distinction is based on an examination of recent data that helps Carnegie analysts gauge research activity as compared with other doctoral institutions. Criteria for research activity includes such factors as research and development expenditures, research staff and number of doctoral conferrals.

Syracuse was one of 15 universities nationwide to move from R2 into the top category in the latest rankings.

Thursday’s announcement that Syracuse scientists were part of a group that observed ripples in the fabric of spacetime called gravitational waves, arriving at the earth from a cataclysmic event in a distant universe confirms a major prediction of Albert Einstein’s 1915 general theory of relativity.

From Syracuse, Peter Saulson, Duncan Brown and Stefan Ballmer were all instrumental in this discovery: Saulson began his work with LIGO (Laser Interferometer Gravitational-Wave Observatory) Group 35 years ago and formerly served as the lead LIGO spokesperson; Brown is a LIGO leader in the search for black holes; and Ballmer has spent considerable time in building the detector. There were also many students—both undergraduate and graduate—who worked on this research. And, I want to thank ITS for the significant role they played in the discovery as well. I also want to acknowledge past deans and department chairs for their support of this research over the years.

At last month’s meeting I was asked to share some additional information about the results of the voluntary separation incentive program that occurred last year. Before I do that, I want to recall the overall context for why the University offered the program and why it was successful. In April 2014, an independent analysis performed by Bain Consulting was shared openly with the University. It indicated that the University needed to identify areas of improvement and efficiency, including staffing levels, to better align with our peers and our goals.

The most expedient way to do that would have been to institute a series of involuntary staff terminations across schools, colleges and administrative units. However, working with the trustees, deans and senior leaders, we chose a more thoughtful alternative path we hoped would result in a far lower number of involuntary separations being necessary.

Ultimately, the voluntary separation incentive program was successful and allowed deans and other unit leaders to have the flexibility in making decisions about appropriate staffing levels in line with our effort to have resources available to address our academic priorities. As I told you in October, given the success of the program and careful stewardship of the work force, we do not anticipate any institutional involuntary terminations this fiscal year.

Finally, I want to again recognize that it is not easy to make changes in the way that we operate by reducing staff. I greatly appreciate the challenging decisions made by leaders and managers, and the continued positive attitude of the faculty and staff as we implement these reorganizations

The University is working on developing a 10-year forecast that will support the objectives and goals of the Academic Strategic Plan and the Campus Framework Plan.

The 10-year forecast will regularly be updated to set forth a forecast period of 10 fiscal years beyond the current fiscal year.

Several preliminary discussion meetings have occurred with trustees, deans, senior administrators and student leaders to discuss sustainable long-term budget planning, and additional communications meetings will be scheduled with those groups.

All searches continue to move fast. The dean of Hendricks Chapel search will be selecting and announcing a search committee this week. Interviews for the College of Visual and Performing Arts Dean position and the dean of Maxwell position will be in April. The finalists for the Senior Vice President for Student Affairs will be invited to campus for a formal presentation later this month. The College of Law Dean will be having finalists’ visits to campus soon, with the goal to have an announcement in mid-March. And finally, the search that is closest to the finish line—that of the Vice Chancellor and Provost—is nearing a close. The finalists visited campus in the last two weeks and we expect to be in negotiation this coming week.

As announced yesterday, an update session on the Campus Framework will be held March 2 at 4 p.m. in the Goldstein Auditorium at Schine Student Center.

At the update session, students, faculty and staff will have the opportunity to hear about the latest status of the Campus Framework and key projects expected to be included in the first phase of the plan. Taking part in the event will be Michael Speaks, dean of the School of Architecture, a representative from Sasaki Associates, members of the Campus Framework Advisory Group and other University leaders.

The Advisory Group, comprised of faculty, staff and students, collaborated with Sasaki Associates, the University’s design partner, to analyze the viability of all current campus structures. The group was also charged with exploring ways to make the Syracuse campus—both inside and outside of the classroom—a better place to live, study, and work.

I wanted to remind you that our Climate Assessment Survey opened on Feb. 9 and will remain open for faculty, staff and student input until March 11. I took the survey just today and encourage the rest of you to as well.

Climate refers to the current attitudes, behaviors and standards of employees and students concerning the access for, inclusion of and level of respect for individual and group needs, abilities and potential.

This survey is vitally important because data from it will help inform future plans to foster a more inclusive learning, living and working environment at the University.

The survey takes about 20 minutes to complete.

Those are the items I wanted to address with you today. Thank you.