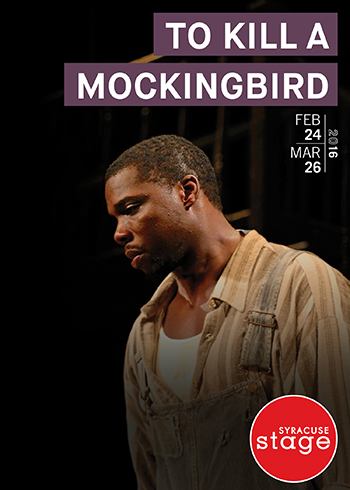 Through the familiar story of small-town lawyer Atticus Finch, his daughter Scout and the falsely accused Tom Robinson, the stage adaptation by Christopher Sergel, like its source material, examines the destruction of childhood innocence in a world poisoned by fear, hatred and racial prejudice.

Lee’s iconic story has had an influence on Bond, as an African American man and as an artist. “’To Kill a Mockingbird’ is a book and a story that has always moved me,” says Bond, who began considering adding the play to a Syracuse Stage season 18 months ago. Bond sees the play as a way of addressing national issues of xenophobia and racial injustice. These prejudices have always been around but have seemingly exploded recently, demonstrating that they have never been an issue that only exists in the South. In casting the production, Bond found that his cast shared his opinion on the importance of mounting the play in these times. “I think the themes that the play and the original story that Harper Lee is touching on are still incredibly relevant,” says Bond, “I’d say tragically relevant, today.”

Bond conducted extensive auditions for the roles of the three child characters at the center of the story, particularly the character of young Scout. In order for the roles to resonate as truthfully as the adult characters, Bond needed child actors with a strong sense of emotional maturity that would allow them to better comprehend such complicated themes. In casting local child actors Sera Bullis, Matthew Caraccioli and Anthony Cawley, Bond found the qualities that he was looking for. These actors would need to read the book as well as to learn about the Jim Crow South and gender roles in the 1930s, as a way of understanding the town of Maycomb. “What makes someone mature is experience,” says Bond. “So I wanted kids that brought the right experience.”

Along with the three children, the show features a cast of veteran stage actors and 12 members of the local community who will fill out the gallery in the courtroom.

Bond is currently in his last season as producing artistic director at Syracuse Stage. The upcoming play “The Christians” will be his final production. He will be moving to Seattle this summer to become a full professor at the University of Washington.

Nelle Harper Lee, born in 1926, grew up in Monroeville, Ala. “To Kill a Mockingbird” was her first book. For the book, she was awarded the Pulitzer Prize for Literature in 1961 and the Presidential Medal of Freedom in 2007. Her book was adapted into an Academy Award-winning film in 1962. A sequel, “Go Set a Watchman,” was published in 2015.