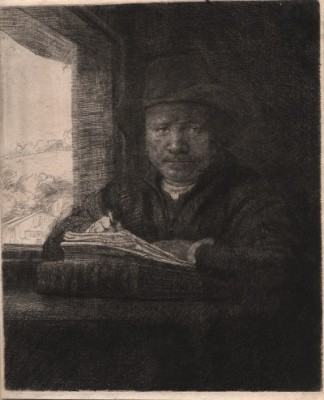 “I learned how building an exhibition works, framing and spacing the display and deciding whether to organize by theme or chronologically,” she says. “There are all these things you don’t think about when you go to an exhibit. There’s a lot of work that goes into it to make it flow.”

The exhibition features roughly 30 works on paper from the University Art Collection and a private collection. It includes etchings, engravings and drawings by Northern Baroque masters including Rembrandt van Rijn, Jan van de Velde II and others.

Garcia and Olivia Pek ’15 G ’17 researched the selected artwork and artist biographies and wrote some of the exhibition’s didactic labels, which provide context for the artists and their work.

Most people are more familiar with the paintings of17th-century masters, Franits notes. But printmaking was “a booming field in those days,” he says. “Many of these artists’ names are not household names, but they were famous in their own day,” he adds.

On display are six Rembrandt etchings that the University owns. Franits describes etching as “a complex process that included copper plates and needles and wax.” Rembrandt, he adds, “was a master of this, as he was of everything.”

“Self Portrait Drawing at a Window” (1648) is “sort of a mid-career selfie,” Franits says. “Rembrandt experimented a lot with the copper plates to get different lighting effects.” Sheet of “Studies with a Woman Lying Ill in Bed” (c1641-1642) show Rembrandt using copper plates as a sketch pad, showing several vignettes. Pictured is Rembrandt’s wife, Saskia, who died several months after giving birth to their only surviving child.

Rembrandt shows a more whimsical side with two small etchings. Side by side in one frame are two pieces from 1634: “A Peasant Calling Out: ‘Tis Vinnich Kout’ (‘It’s bitterly cold’)” and “A Peasant Replying: ‘Das Niet’ (That’s nothing).” “They’re meant for the wealthy, leisure class, who appreciated caricatures of peasants as ragged and stupid,” Franits says.

A highlight of the graduate seminar was the chance for students to see in person the artwork they were studying. “While we teach art from a broad context, we still think it’s important for students to work with real objects rather than jpegs on a PowerPoint,” he says. “It allows students to understand these artworks as actual objects.”

Garcia enjoyed that aspect of the project. “We were able to look at them with a magnifying glass and see the details and see how ornate they are,” she says. “Most are very small. But it’s incredible how much detail is in a tiny 5×7 drawing.”

She hopes the exhibition inspires viewers to learn more about 17th-century Dutch art. “These sketches and drawing are a good starting point,” she says. “It’s a good representation of the historical period.”