The Department of Drama tackles the volatile combination of adolescence and anxiety in Simon Stephens’ 2009 play “Punk Rock.” Directed by Robert Moss, this production from one of Britain’s most celebrated contemporary playwrights runs at the Storch Theatre Feb. 19-28 in the Syracuse Stage/SU Drama Complex. Opening night performance is Saturday, Feb. 20, at 8 p.m. 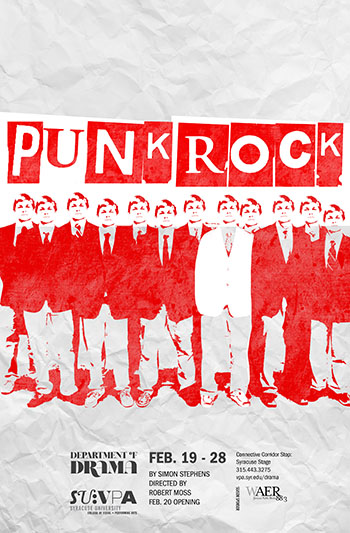 Set at a private British grammar school, the equivalent to an American high school, the play navigates the increasingly on-edge angst of seven teenagers during their preparation for final examinations. As if there weren’t enough pressure already to perform well in their studies, their examination results determine where they’ll be able to go to university. At its core, the play looks at how our society, with its increasingly high expectations to be successful and its stigmatization of mistakes, has turned school into the ultimate pressure cooker.

Moss feels that students will relate to the play due to the brutal honesty of Stephens’ writing in depicting the relentless pressures that multiple forces, from education systems to parents, place on young people today.

“He [Stephens] creates real, three-dimensional people,” says Moss. “I think he’s drawn seven incredibly honest portrayals of these seven kids. They’re very different from each other. They each have their incredible anxieties.”

The play runs without an intermission, which allows the audience to feel the tensions that the students find themselves trapped by. The setting, a school library utilized by the students, stays the same throughout the play, except for the last scene, in which an adult character appears for the first time. Over the course of seven scenes, the audience gets to know the seven students in all of their insecurities and witness how the pressure they feel manifests in various destructive guises.

One of Moss’ creative decisions for the play is to have the cast dance to punk music during the play’s interludes, or scene changes, as a way of showing each character’s inner “punk.” “Each one of the interludes is centered on one or another of the seven characters,” says Moss. In researching punk music, he found that the rebellious genre centers on the act of doing something simply because you can. “It’s meant to be a kind of inner explosion of what this character would really be like, getting rid of tension,” adds Moss.

Moss served as the artistic director of Ithaca’s Hangar Theatre from 1982-1996, and then at Syracuse Stage from 1996-2008. He has also taught in the Department of Drama at Syracuse University.

Simon Stephens, born in 1971, is a British playwright whose earliest plays focused on the plights of youth. He attended the University of York, graduating with a degree in History. Raised in the British town of Stockport, the married father of three and former teacher currently lives in London. Stephens won a Tony Award in 2015 for his stage adaptation of Mark Haddon’s 2003 bestseller “The Curious Incident of the Dog in the Night-time.”

Advisory: “Punk Rock” contains incidents of violence, including gun violence. It is intended for mature audiences.