The 45th annual Syracuse University Men’s Basketball Hardwood Banquet, sponsored by radio station TK99, will be held on Sunday, March 6, at the Oncenter in Syracuse. 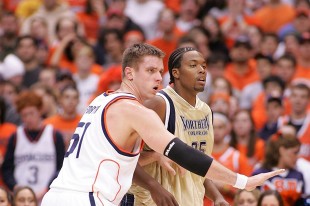 Craig Forth, left, guards his man during an SU basketball game.

The Vic Hanson Medal of Excellence will be presented to former center Craig Forth ’05, a member of Syracuse’s 2003 NCAA Championship team and one of the few Orange performers to start every game of his career. Forth was with the first unit for 136 games from 2001-02 to 2004-05. Syracuse was 103-33 during that span.

Forth averaged 4.7 points, 4.6 rebounds and 1.5 blocked shots during his career. Three of the squads he played on made NCAA Tournament appearances.

Forth earned a number of academic awards while attending Syracuse. He was presented the Big East Conference Aeropostale Scholar-Athlete Award during his senior season. Forth was a two-time Academic All-American (2003-04, third team; 2004-05, second team). He was on the Syracuse Athletic Director’s Honor Roll in each of his eight semesters. Forth earned a spot on the Big East Conference All-Academic Team after each of his four campaigns.

An inclusive education and geography major at Syracuse, Forth worked as an elementary school teacher after earning his degree. He is currently an assistant principal at Mechanicville Junior-Senior High School (N.Y.).

In 2014, Forth delivered the Convocation address at the School of Education ceremony.

The Hardwood Banquet is scheduled to begin at 5 p.m. with a reception that includes a silent auction featuring unique sports memorabilia, a player autograph session and an opportunity to bid on having players sit at your table. Dinner will begin at 6:00 p.m.

To reserve seats for the Hardwood Banquet, contact the Orange Club by phone (315-443-1419), or by registering on-line.