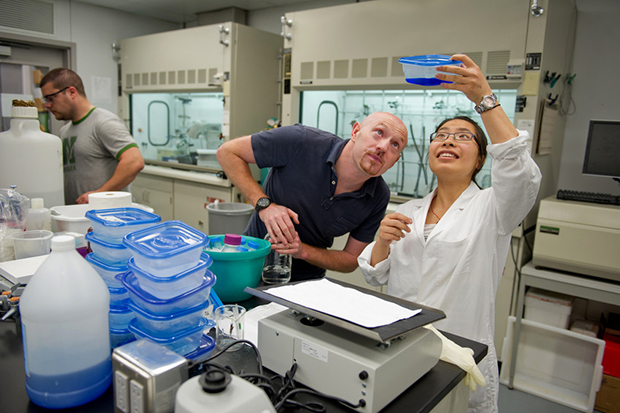 Syracuse has moved from an “R2” designation to an “R1” designation, denoting “highest research activity,” in the 2015 Carnegie Classification of Institutions of Higher Education.

Syracuse University has moved into the top tier for research activity among all doctoral universities in the nation, according to the recently released 2015 Carnegie Classification of Institutions of Higher Education.

In the new rankings, which are issued twice a decade, Syracuse moved from an “R2” designation in 2010, denoting a “higher research activity,” to an R1 designation, which is the top research class a university can be awarded. The distinction is based on an examination of recent data that helps Carnegie analysts gauge research activity as compared with other doctoral institutions. Criteria for research activity includes such factors as research and development expenditures, research staff and number of doctoral conferrals.

Syracuse was one of 15 universities nationwide to move from R2 into the top category in the latest rankings.

“Earning this classification is powerful recognition of our efforts to grow and expand research” says Syracuse University Interim Provost Liz Liddy. “We have already identified research and discovery as a key focus area in our academic strategic plan, and this is one more step in the right direction. I am proud of my colleagues across all of the schools and colleges and look forward to many future accomplishments.”

Interim Vice President for Research Peter Vanable says this distinction is a strong affirmation of faculty scholarship. “It acknowledges the great work that our faculty are already doing” says Vanable. “This is a proud moment, but there is much more we can do to effectively build on this momentum, and we plan on doing just that.”

The Carnegie Classification, created by the Carnegie Foundation for the Advancement of Teaching and first published in 1973, is the widely accepted industry standard for classifying schools by higher education researchers and others. The U.S. Department of Education and many higher education associations use the classifications to organize data as well as determine a school’s eligibility for grant money. The classifications are also used by U.S. News and World Report in grouping institutions by type for its popular Best Colleges rankings guide.

The Carnegie Classification defines its doctoral grouping as those institutions that awarded at least 20 research/scholarship doctorates in 2013-14. Professional practice doctoral degrees, such as juris doctors, did not count toward that total.

For more information on the Carnegie Classification of Institutions of Higher Education, visit the institution’s website here.