A professor in the College of Arts and Sciences has returned from a prestigious appointment at Goethe University (GU) in Frankfurt, Germany. 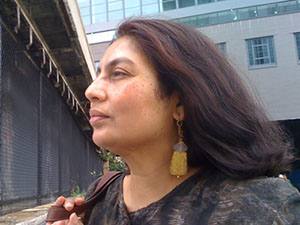 Chandra Talpade Mohanty—Distinguished Professor and chair of women’s & gender studies (WGS), as well as Dean’s Professor of the Humanities—spent part of December as the Angela Davis Guest Professor for International Gender and Diversity Studies at GU’s Cornelia Goethe Center. While there, she gave two public lectures and taught an intensive graduate-level workshop.

Mohanty was the second holder of the chair, originally occupied by its namesake in December 2013. (Davis has ties to Syracuse, as well, having served as Distinguished Visiting Professor in WGS from 2007 to 2010.) Mohanty is considered one of today’s most important post-colonial researchers and activists.

Kira Kosnick, professor of sociology at GU, says Mohanty’s “challenges to white, Western feminism and her passion for transnational feminist politics,” particularly in the Global South (i.e., Africa, Latin America and parts of Asia, including the Middle East), were deciding factors in her appointment.

“[Mohanty’s] work and her understanding of teaching and scholarship exemplify the spirit with which Angela Davis engages the academy,” says Kosnick, adding that Mohanty’s landmark essay, “Under Western Eyes: Feminist Scholarship and Colonial Discourses,” is required reading for GU gender studies students. “Not only is Chandra concerned with the articulations of racism, gender and global capitalism, but she also sees one’s work as part of larger emancipatory political projects within and outside of the academy.”

Mohanty described her time in Frankfurt as “intellectually challenging and deeply satisfying.” She also was quite busy. Hundreds of people turned out for her two lectures: “Wars, Walls, Borders: Anatomies of Violence and Postcolonial Feminist Critique” and “Neoliberal Projects, Insurgent Knowledges and Pedagogies of Dissent.” Both events took a hard look at what Mohanty referred to as “racialized and gendered violences enacted by neoliberal goverments,  corporations and institutions of higher education in constructing normative definitions of citizenship.”

She also led a workshop on “Colonial Legacies, Neoliberal Hegemonies and Insurgent Feminist Praxis,” drawing students from as far away as Cologne and Berlin.

Rounding out her stay were back-to-back meetings with grassroots activists. Among the issues they discussed were asylum and refugee seeker rights; institutional racism and racial profiling; feminism and migration; domestic and gender violence; anti-capitalism, anti-war and anti-gentrification; and leftist feminism.

“It was 10 days of intense dialogue, discussion and learning about the social, economic and political contradictions facing Germany—and Europe—at a historic time,” says Mohanty, citing the recent flood of migrants and refugees into Europe from war-torn Syria, Afghanistan, Kosovo and Iraq. “It deepened my understanding of how coalitions and solidarities are built in social movements in a landscape that’s different from the one I’m familiar with in the United States.”

Mohanty says that, despite the language and cultural challenges that come with teaching abroad, she found Germany to be “pedagogically rich and creative.” She also was honored to be at GU, which is the birthplace of the “Frankfurt School” of Critical Social Theory and has been a formative influence on her intellectual development as a socialist feminist scholar.

“We cannot understand or adequately address current economic and social crises without an anti-racist, gender analysis that pays attention to the ways women, men, queer and transgender people are impacted differently in similar situations,” says Mohanty, adding that colonial legacies and normalized racial practices vary from country to country. “It’s time Europe acknowledged and confronted its own history of colonialism.”

A self-avowed “anti-racist feminist,” Mohanty is an expert on transnational feminist theory, post-colonial studies, analysis of imperialism and racism, anti-racist pedagogy and anti-capitalist critique. Most of her writing explores the role of power among colonialism, race, class and gender. 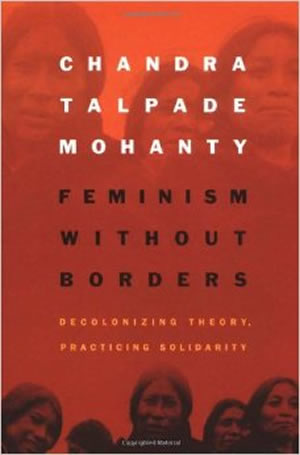 Mohanty is the author and co-editor of five books—notably “Feminism Without Borders: Decolonizing Theory, Practicing Solidarity” (Duke University Press, 2003), which has been translated into a half-dozen languages and analyzed in numerous essays and articles. Also, she is an internationally sought-after speaker, visiting professor and activist, with two recent honorary degrees from Lund University (Sweden) and The College of Wooster (Ohio).

“Decolonization is a critical examination of colonial inheritance at all levels,” says Mohanty, who also holds appointments in Syracuse’s Department of Sociology and the Cultural Foundations of Education program. “It’s an issue of extreme intellectual and political importance.”

Kosnick says that the “positive energy [Mohanty] set free” was virtually palpable, calling her a “huge inspiration” to students of color and those engaged in anti-racist politics.

“Chandra managed to engage people in local issues of concern, encouraging them to organize and build alliances and to understand their concerns as part of wider political struggles,” she adds.

Mohanty hopes some of her students and colleagues from GU find their way to Syracuse, via a fellowship or scholarship. “It would be great for some of them to be in residence in WGS,” she says. “This is the kind of transnational feminist scholarly collaboration to which the WGS department at Syracuse aspires.”