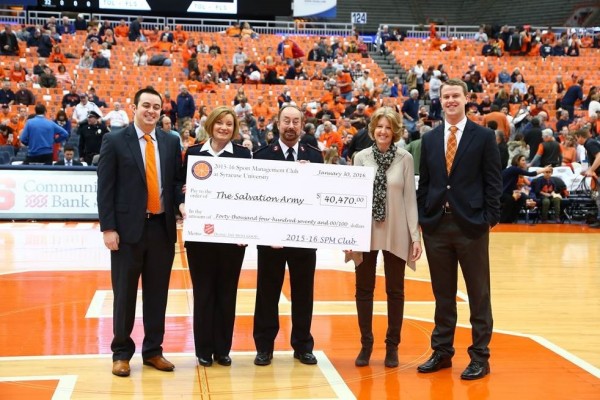 During the SU Men’s Basketball game on Dec. 2, supporters placed bids on hundreds of items, including sports memorabilia, electronics and tickets to major sporting events. Following the silent auction, the club also hosted an online auction, in collaboration with Steiner Sports Memorabilia, which showcased a number of premium items up for bid.

All proceeds from these efforts benefited The Salvation Army in Central New York.

“This total represents not only the culmination of months of hard work on behalf of nearly 100 Syracuse University students, but clearly demonstrates the giving spirit of the greater Syracuse Community,” says Kate Veley, SPM club co-advisor. “From the donation of over 500 auction items, to the eager bidding by thousands of SU fans, the resulting donation to the Salvation Army exhibits our community’s desire to support those in need, right here at home and for that, we are most grateful.”

The Salvation Army serves nearly 40,000 Onondaga County residents each year. “The Salvation Army provides hope and resources to those most in need in our community, through more than 40 different programs,” says Major Karla Clark, chief executive officer of The Salvation Army in Onondaga County. “From the tiniest infant in our day-care program to the homeless teen mother learning to live independently and provide for her child, the money raised by the Sport Management Club at Syracuse University through the charity sports auction will do the most good by empowering those in need our community to reach their full potential. We are overwhelmed once again by the generosity of the community and the hard work of these students.”

The SPM Club is a student-run organization in the Falk College’s Sport Management Department. Since its founding in 2005, the club has raised over $312,000 for local charities. Previous beneficiaries of the club’s annual charity auction have included the Boys & Girls Clubs, American Diabetes Association, Golisano Children’s Hospital at Upstate, the Ronald McDonald House Charities of CNY, the Central New York SPCA, the Upstate Cancer Center, Special Olympics New York, Food Bank of CNY and Make-A-Wish.

For more about the charity auction, or to find out how to contribute to next year’s event, visit www.sucharitysportsauction.com.