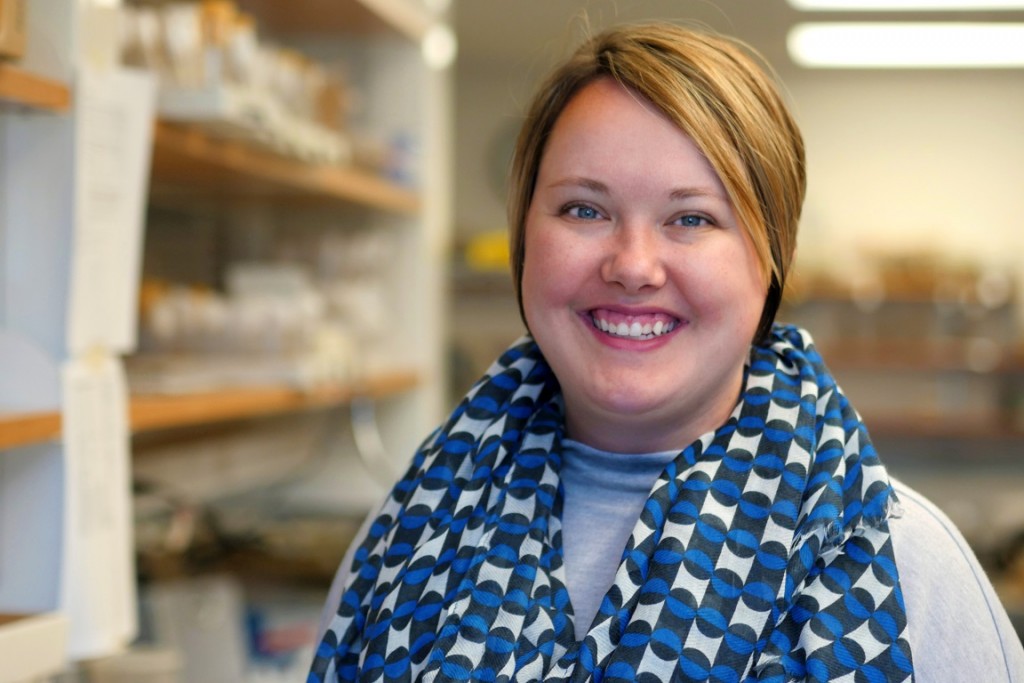 Elizabeth Droge-Young, a doctoral candidate in biology at the College of Arts and Sciences, recently had her findings on the mating practices of the red flour beetle published online by Behavioral Ecology.

Elizabeth Droge-Young has long been fascinated by the mysteries and motivations behind sexual selection. But the promiscuity among females of one particular species—the red flour beetle—had her particularly stumped. These beetles would mate multiple times over the course of a day, sometimes multiple times an hour. Were they getting something more out of the mating process than the sperm they needed to reproduce? If so, what?

A doctoral candidate in biology at the College of Arts and Sciences, Droge-Young believes she has found some answers, and her findings have been published online by Behavioral Ecology, the official journal of the International Society for Behavioral Ecology.

“Theory suggests that there should be an optimal level of mating for females, after which point they should no longer be interested in mating,” says Droge-Young. “But that doesn’t seem to be the case in these beetles, even though they get enough sperm in a single mating to lay fertilized eggs for many months. So mating multiple times an hour can’t just be to get sperm.”

Her research focused on four possibilities: that mating benefits the female beetles by providing them with moisture; with nutrients in the ejaculate; with proteins that support egg laying; or with additional sperm. The findings led her to conclude that it was the need for additional moisture that fed the beetles’ drive to mate so frequently—even to the point where they would sometimes coerce a reluctant male.

“That was my favorite hypothesis,” Droge-Young admits. “It just makes sense intuitively. Thirsty females in dry conditions benefit from a moist ejaculate.” The red flour beetle, she says, originated from humid areas around India, but today the beetles often live in a much drier environment—grain storage facilities. The hydration provided through mating, she says, serves to enhance reproductive success in low-humidity environments.

The benefits do not appear to be reciprocal. While female fitness increased with frequent mating, the research showed that male longevity significantly declined with increasing exposure to the females.

Droge-Young, who has a B.S. in biological science from Colorado State University and expects to complete a Ph.D. this spring, traces her fascination with sexual selection back to her childhood.

“I grew up on ‘Mutual of Omaha’s Wild Kingdom’ and nature specials and was always captivated by the bizarre traits and behaviors that males used to get females to mate with them,” she says. “During my undergrad work, I was introduced to a bit more of the theory behind sexual selection and was fascinated by different reasons why a female might choose to mate with particular males—and how that choice might play into the quality of offspring she produces.”

Droge-Young says her findings underscore the important role environment can play in species’ mating habits. “Few studies on reproduction patterns consider that factor,” she says. “I hope this study inspires others to consider how changes in the environment can influence how mating systems work.”

While she is listed as the principal investigator for the study—titled “Extreme ecology and mating system: discriminating among direct benefits models in red flour beetles”—Droge-Young credits the contributions of, and lists as co-authors on the paper, her advisor, biology professor Scott Pitnick; biology professor John Belote; and undergraduate research assistant Anjalika Eeswara.

To read the complete article on her findings, click here.