Syracuse University Men’s Basketball Rallies around One of Its Own 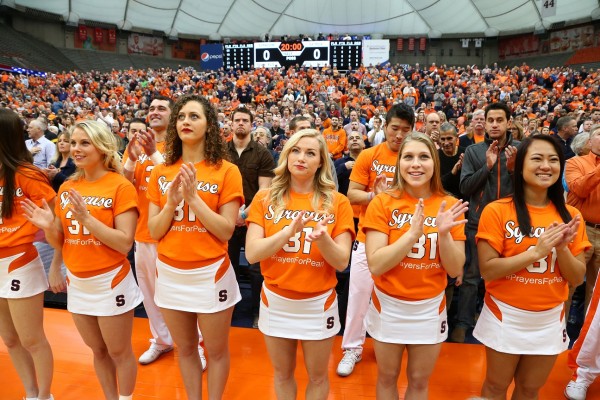 The Syracuse University Men’s Basketball team used its two most recent home games as an opportunity to show support for Dwayne “Pearl” Washington.

Washington, one of the University’s most beloved and successful players, has been dealing with a serious health issue since last fall and is currently undergoing treatment in the New York City area.

This past Saturday, 1,000 “Prayers for Pearl” T-shirts were handed out to students during the Syracuse vs. Georgia Tech game. The giveaway, which was sponsored in part by Sidearm Sports, provided the Syracuse community an opportunity to show its support to Washington. Vendors on Marshall Street are now selling the shirt as well.

The Syracuse squad debuted new orange warm-up shirts with “Pearl” written in script on the front and Washington’s jersey number, 31, on the back, during a January 28 contest with Notre Dame. Each player’s individual jersey number appeared on the sleeve.

Deputy Athletics Director for Administration John Cunningham and Assistant Equipment Manager Dan Shworles were among a group of staff who worked on the development and design of the shirt.

Cunningham says the shirt is a way for the entire team to show its support for Washington and honor his tremendous contributions to the program and the University.

“Pearl was one of the marquee performers in the Big East Conference,” says Cunningham. “Our players appreciate the significant role he played in helping Syracuse become one of the top basketball programs in the country.”

Washington was a member of the Syracuse Men’s Basketball team from 1983-1986. He went on to play professional basketball for the New Jersey Nets and Miami Heat. Washington received a bachelor’s degree in speech communication from the College of Visual and Performing Arts in 1998. 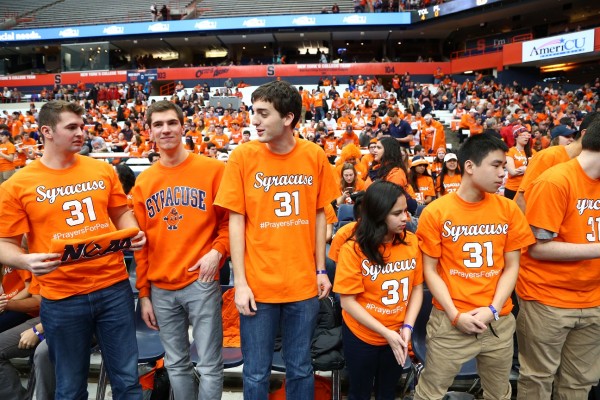 This past Saturday, 1,000 “Prayers for Pearl” T-shirts were handed out to students during the Syracuse vs. Georgia Tech game. The giveaway was sponsored in part by Sidearm Sports. Photo by Michael J. Okoniewski-SU Athletic Communications