Point of Contact Gallery will host an opening reception for “Pin the Tail,” an exhibition by Catalina Schliebener, on Thursday, Feb. 4. The reception will take place from 6-8 p.m. and is free and open to the public. Refreshments will be served. Free parking is available in the Syracuse University lot on the corner of West and West Fayette streets. 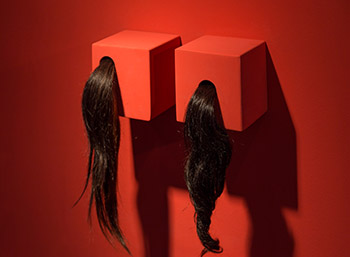 “Pin the Tail” is a site-specific installation based on four photographs found by the Schliebener at a garage sale in New York City in 2014. The photographs, which depict children playing Pin the Tail on the Donkey, became the catalyst for this exhibition with the addition of other found objects that relate symbolically or in form. The concept of “Pin the Tail” started to arise through the discovery of these objects and the potential formal and semantic relationships among them.

Just as in children’s stories and songs, children’s games involve a subtle normative character through which children indirectly learn rules of behavior, socialize and acquire specific roles that will later be reproduced in the adult world. Schliebener is interested in working with icons related to youth that implicitly reveal norms associated with the construction of gender, identity and class. In “Pin the Tail,” she analyzes and deconstructs the normative character and functionality of the game Pin the Tail on the Donkey. By doing so, Schliebener calls into question the nature of these objects by practicing new discourses in which they are not dependent upon the system that produced them.

Schliebener (born in Santiago, Chile, in 1980) received her bachelor of philosophy of Universidad de Arte y Ciencias Sociales ARCIS, in Santiago. Afterwards she studied visual arts at the same university. From 2002-2008, she worked as an assistant professor within the areas of philosophy and art theory at several universities in Chile. Schliebener’s work has been exhibited individually and collectively in galleries, museums and art fairs in Santiago de Chile, Buenos Aires, São Paulo, Lima, Belfast, Londres, Miami and New York. She has also received scholarships granted by the Development of Culture and the Arts Fund of the Government of Chile (Fondart), the Board of Cultural Affairs of the Ministry of Foreign Relations of Chile (Dirac) as well as the Henry Moore Foundation of the United Kingdom.