Shakespeare in Our Time

Dympna Callaghan, the William L. Safire Professor of Modern Letters in the College of Arts and Sciences, has plenty to say about William Shakespeare, as the world marks the 400th anniversary of his death in 2016. She returned to campus last fall, after spending a year studying and writing about the author during her travels to Italy, California and Australia.

The last 20 years have seen an “explosion of textual, literary and historical scholarship” on the Bard of Avon, says Callaghan, who is based in the Department of English. “A lot of it is just really digging and sustained research,” she explains. “We know vastly more about the context in which he wrote. We know more about London as a city and the theaters and how he worked.”

Callaghan has two books about Shakespeare coming out this semester. One just out is “Shakespeare in Our Time” (Bloomsbury, 2016), which she has co-edited with Suzanne Gossett. The book is a project of the Shakespeare Association of America, which Callaghan presided over from 2012-2013. The publisher calls the essay collection a “‘state of the nation’ look at Shakespeare criticism” and a “stimulating exploration of where Shakespeare studies will go next.”

Due out next month is a new edition of “A Feminist Companion to Shakespeare” (Wiley-Blackwell, 2001), another collection that Callaghan edited. The book’s 10 new essays include one by Amanda Eubanks Winkler, professor of music history and cultures in Arts and Sciences, who writes about Shakespeare’s music. Amy Burnette, a graduate student in English, writes about “The Winter’s Tale” for the anthology.

The first leg of Callaghan’s leave was a fellowship at the Bogliasco Centre for Arts and Humanities in Bogliasco, Italy. She spent a month at the Liguria Study Center on the Italian Riviera, working with religious historian Lori Anne Ferrell on a project examining Shakespeare and religion.

“This is a big and important topic,” Callaghan says. “Scholars have been reticent to claim Shakespeare’s treatment of religion as relevant in any substantive way to the present.” She points out that “Shakespeare wrote about the major belief systems of his day—Islam and Judaism and, most obviously, Christianity, the European faith so badly fractured by the advent of the Reformation.”

Callaghan and her co-author set out to make a bold claim. “We may never know Shakespeare’s own religious temperament,” Callaghan says. “We can discern, however, the specter of sectarianism that underwrites Shakespeare’s plots. [Polish political activist] Jan Kott once famously claimed that, in violent, incomprehensible and arbitrary times, Shakespeare is our contemporary. Yet too few scholars dare to make and sustain this claim today—on behalf of literature, on behalf of the humanities, on behalf of Shakespeare.”

In the next stop on Callaghan’s leave, she served as a visiting professor at Claremont Graduate University, and pursued research at San Marino’s Huntington Library, which holds early editions of Shakespeare’s works. Callaghan’s book “Hamlet: Language and Writing” (Bloomsbury, 2015) was published last spring. While at the Huntington, she gave several lectures, including “Murder Most Foul: What Makes Hamlet Great.” At the California Shakespeare Festival, she delivered a keynote address about freedom of speech in Shakespeare’s England.

Callaghan concluded her travel with a visit to Australia, where she gave a presentation at the University of Melbourne, and was the Lloyd Davis Memorial Visiting Professor at the University of Queensland. There, she taught a graduate seminar on the relationship between poetry throughout history and political and personal freedom. She also delivered the 10th anniversary memorial public lecture for Davis, an expert in the verse, drama and prose of the English Renaissance, who died in 2005. 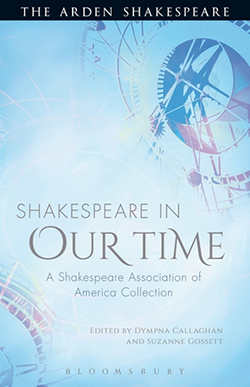 Callaghan’s whirlwind career reflects the eternal interest in Shakespeare, she says. The question that spurs her work is “How is it that a world before democracy, before freedom of speech, before freedom of religion produced the greatest writer that ever lived?”

Scholars and theater-lovers remain interested in Shakespeare because of universal ideas he wrote about and the language in which he expressed them, she explains. Amid social, religious and political turmoil during England’s Reformation, Shakespeare “found a place for discourse in theater,” she says. “For example, Montague is the name of a prominent Catholic family in Elizabethan England,” she notes, referring to “Romeo and Juliet.” “The most obvious feud in that time was religion,” she says, “and the play raises questions about arranged marriages, sexual choice, identity—topics in the news today. A 2012 Iraqi production of ‘Romeo and Juliet’ as Sunni vs. Shiite, for example, shows the deep animosity people harbor on the grounds of race and religion. We can still learn from that.”

“Othello”’s focus on racism reminds us that “you can’t read what’s in someone’s heart,” she says. “People who are different from you are either hated or desired.” With so much discord in the world, “That’s where we should address our controversies—in art, not on the battlefield,” she says.

In addition to her scholarship, Callaghan is working on the strategic plan for Arts and Sciences. She served as interim director of the Humanities Center, which is administered by Arts and Sciences, from 2013-2014. A highlight of her fall semester was introducing Stephen Greenblatt, a Pulitzer Prize-winning literary scholar, at the Rosamond Gifford Lecture Series in Syracuse. Greenblatt, a Harvard University professor who contributed an essay to “Shakespeare in Our Time,” spoke to her class about “Twelfth Night.”

In 2019-20, Callaghan will return to the Huntington Library, where she has been awarded the Fletcher-Jones Distinguished Fellowship, an endowed position that honors a leading specialist in history or literature.

In the meantime, Callaghan is working on a book on Shakespeare’s poetry and the form of his verse, and is finishing up a new edition of “Romeo and Juliet: Texts and Contexts” (Bedford/St. Martin’s, 2003), due out this spring. She’s also working with Carol Faulkner, professor of history in the Maxwell School of Citizenship and Public Affairs, on a project about the reception of Edwin Booth’s “Hamlet” during the Civil War. Booth’s acclaimed performance as Shakespeare’s Danish prince coincided with his brother John Wilkes Booth’s assassination of President Abraham Lincoln.

“Shakespeare is so unique in his expression of ideas,” Callaghan says. “There’s still so much to learn.”