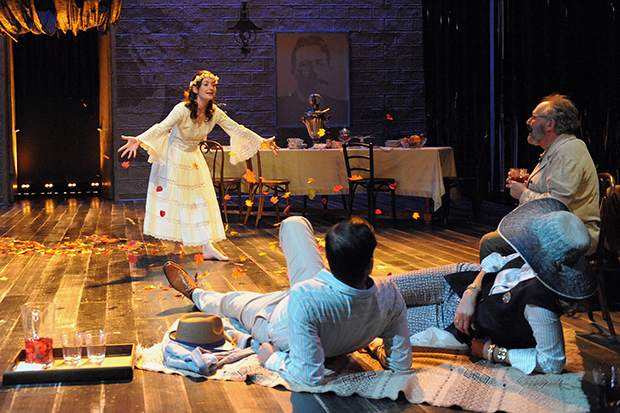 Syracuse Stage begins 2016 with the irreverent comedy “Stupid F***ing Bird,” a contemporary mash-up of Anton Chekhov’s modern classic “The Seagull.” Written by Aaron Posner and directed by Howard Shalwitz, the play comes to Syracuse Stage from the Woolly Mammoth Theatre in Washington, D.C., where it won two Helen Hayes Awards and performed to sold-out houses.

Not so much an adaptation as a new play built on the bones of “The Seagull,” “Stupid F***ing Bird” gives Chekhov’s famous characters and themes a decidedly up-to-date spin. An aspiring young director rampages against the art created by his mother’s generation. A nubile young actress wrestles with an aging Hollywood star for the affections of a renowned novelist. Plus, unrequited love abounds as Dev loves Mash who loves Con who loves Nina who sort of loves Con back but now only has eyes for Trig. Love, art and growing up prove so disappointing, and so comical.

“What Aaron does is sort of remove the entire social context from 19th century Russia,” says Shalwitz. “As a result, he focuses more on simple, universal human relationships, or look at young people who have these dreams of how they want their lives to go and struggle to move beyond those dreams when they don’t work out.”

Part of the way Posner updates Chekhov is to use songs and to let the characters speak directly to the audience to express their thoughts and feelings. At times, they even solicit advice from the audience. “The proverbial ‘fourth wall’ of theatrical realism is shattered from the very first line,” Shalwitz notes, as the play does not begin until the audience says it can.

Posner is a highly regarded director and playwright whose adaptations include “The Chosen” and “My Name is Asher Lev” by Chaim Potok. He recently collaborated with the magician Teller (of Penn and Teller fame) on an adaptation of Shakespeare’s “The Tempest” for the Chicago Shakespeare Theater. He is a founder and former artistic director of the Arden Theatre in Philadelphia.

Shalwitz is a co-founder of Woolly Mammoth Theatre, where he has served as artistic director for more than 30 years. In 2014, he won the Margo Jones Award in recognition of his 35-year commitment to new American plays. Woolly Mammoth has earned a reputation as one of the country’s most influential producers of innovative, provocative new work. The New York Times once cited the theater as “Washington’s most daring theatre company.” In addition to 40 plays at Woolly Mammoth, Shalwitz has directed at numerous leading theater companies.

With the exception of one actor, the cast of “Stupid F***ing Bird” is the same company that appeared in Woolly Mammoth’s world premiere in 2013 and subsequent revival in 2014. For the Syracuse Stage production, Ian Holcomb replaces Brad Koed in the role of Conrad Arkadina, or Con. A 2011 graduate of the Syracuse University Department of Drama, Koed was scheduled to continue in the role but changed plans when he was cast in the new PBS series “Mercy Street.” Holcomb brings an impressive set of credits, having worked extensively off-Broadway in New York, including productions at Theatre for a New Audience (under the direction of Julie Taymor) and at the Irish Repertory Theatre.

“Stupid F***ing Bird” performs Jan. 20-Feb. 7 in the Archbold Theatre at the Syracuse Stage/Drama Complex, 820 E. Genesee St. The opening night performance is Friday, Jan. 22, at 8 p.m. Tickets and information are available at http://www.syracusestage.org, by phone at 315-443-3275 or in person at the Syracuse Stage Box Office (Monday-Friday, 10 a.m.-6 p.m. and two hours before curtain in the evening and on weekends). Discounts are available for groups of 10 or more at 315-443-9844. Discounts are also available for seniors, students and U.S military personnel and veterans. Sign interpretation, open captioning and audio description services are available for select performances.