Since its founding in 2001 through a generous gift from Syracuse University alumnus and trustee Robert B. Menschel ’51, the University Lectures has hosted many of the world’s foremost artisans, authors, educators, designers, journalists, legal scholars, musicians, scientists, social activists and statesmen over an astounding run of 119 events (and counting). 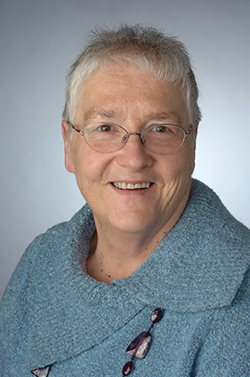 As the current 15th season unfolded, work began on a behind-the-scenes transition to prepare for the departure of longtime series coordinator Esther Gray, who retired Dec. 31 after nearly 40 years at the University. For a good portion of her SU career, Gray had been intimately involved with the University Lectures, working closely from that first season with the series’ architect—Associate Vice Chancellor for Academic Affairs Michael Flusche—and later with Senior Vice President for Human Capital Development Kal Alston and most recently with Interim Vice Chancellor and Provost Liz Liddy.

To ensure the best-possible continuity in the series’ leadership, Liddy several months ago appointed a cross-campus University Lectures Advisory Team co-chaired by Nicole Hill, professor and chair of the Department of Counseling and Human Services in the School of Education, and Barbara Kay Stripling, assistant professor of practice and senior associate dean in the School of Information Studies.

“I’ve been very impressed with the enthusiasm of the advisory team and the high caliber of discussion in the planning meetings,” Liddy says. “As we move forward, I have great confidence in the group’s abilities to offer guidance to the University Lectures.”

Moving forward, the advisory team will collaborate on planning and logistics with Ellen King, executive director of SU’s Office of Special Events.

Gray departs with many fond memories. “Working with the University Lectures for the past 15 years has been a joy and a privilege, but the real reward has been to introduce the world to the amazing faculty and students we have at SU,” she says. “At the same time, I’ve been blessed with 15 years of memorable moments and friendships with so many extraordinary people who just happened to be our speakers.”

And she echoes Liddy’s confidence in the advisory team. “As much as it saddens me to walk away from the lectures, I have great faith and trust in the members of the advisory team to continue and improve the tradition,” Gray says. “I feel like I am passing the baton to exactly the right people. Now I get to sit in the audience and enjoy!”

Those interested in offering feedback or suggestions for the University Lectures are invited to write to e-lectures@syr.edu. For more information on the series, visit the UL website and Facebook page.