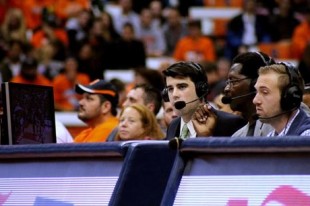 For one of the leading broadcast schools in the country, it’s a story with a familiar ring. A young talented broadcaster, after honing his skills at Newhouse and WAER, becomes a familiar voice, announcing regionally and nationally televised sporting events.

It’s happening again. Tonight, Jay Alter ’16 is handling play-by-play duties for ESPN 3’s telecast of the Syracuse University men’s basketball game against Montana. He also called the first game of the season against Lehigh, and has a handful of women’s basketball and men’s lacrosse games to handle in 2016. Before he graduates.

“It’s awesome, but also a little uncomfortable,” admits Alter, who says he didn’t want to brag to his friends and classmates. “Hopefully as we do more games, I’ll get better at telling people about it.”

Alter, who also serves as sports director at WAER, thanked Sue Edson, executive senior associate athletic director and chief communications officer, for pointing him out to ESPN. “It started with the game against Lehigh, and they said if they liked what they heard and saw there would be more games that followed. I’ve been thankful to Sue from the beginning.”

He’s also thankful for the experience he’s gained at WAER. “At WAER, I’m part of a group of very talented classmates. WAER is where I can get reps at play-by-play. It’s built to make the next great broadcaster. I can understand why Syracuse has the advantage. It’s WAER. There is no other school sending their students to cover all the major contests.”

“Jay plays an important leadership role at WAER managing the sports program,” says WAER General Manager Joe Lee. “He brings excitement and energy to every broadcast and sets the tone for the rest of our remarkably talented sports staff.”

“He impressed me immediately with his intelligence and his seriousness of purpose,” says John Nicholson, a professor of practice at Newhouse who serves as director of the Newhouse Sports Media Center and is also Alter’s academic advisor. “Jay is part of a very strong senior class.”

Nicholson adds, “Jay is confident without being full of himself,” and points out the importance of a play-by-play broadcaster working as part of a team, a concept Nicholson says Alter has grasped quite well. “Jay realizes the broadcast isn’t just about him. He appreciates the people he works with and is always prepared. He is always looking for advice from me and from our alumni.”

Nicholson says Alter is also generous with his time, recently dedicating a day to helping students from inner city schools learn more about a career in sports broadcasting, along with being generous with other people too. “One of the toughest parts of being sports director at WAER is figuring out who covers which game,” says Nicholson. “Jay doesn’t play favorites, and he doesn’t give himself the key matchups. That’s not who he is. He’s one of the top 10 most talented guys I’ve worked with here, and he strives to get better. He’s done a nice job for ESPN and is improving all the time.”

For Alter, that’s meant a growing audience, from loyal listeners of WAER to a TV audience watching on ESPN. “I love telling audiences something they don’t know,” says Alter. “I’ve had practice on WAER, but TV is a different beast, it’s almost like you’re calling two different sports. In radio, you have to describe everything, so you don’t have an opportunity to tell stories. You’re busy just trying to describe where the ball is. On TV they can see it, so it gives me more opportunity to throw some more journalism in there and find great stores to tell, in addition to calling the action.”

The journalism background he attributes to Newhouse. When he was searching for schools (with some help from his dad), Syracuse seemed like a natural fit. “When you see the names on the wall, and they’re endless, including Sean McDonough, Ian Eagle, Mike Tirico, Marv Albert, Dick Stockton, Bob Costas, everybody who is anybody in terms of calling the biggest games in the biggest moments, they’re from Newhouse.”

If he continues along this path, you can bet Jay Alter’s name will be there someday too.