Newhouse Student Honored as 2015 Young Travel Photographer of the Year

Newhouse School sophomore Chase Guttman has been named 2015 Young Travel Photographer of the Year (TPOTY) in an international competition judged by museum curators and magazine editors. 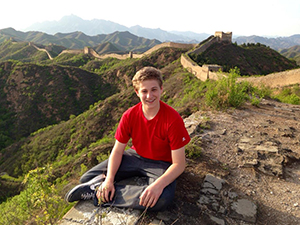 He first earned TPOTY honors in 2012 in the 14 and under age group, and again in 2012 when he won the Emerging Talent award. He has traveled to every U.S. state and over 50 countries.

In reviewing his work, TPOTY judges said, “Chase’s portfolio tells a story of the Basuto people in Semonkong, Lesotho, giving glimpses into their life and the landscape which surrounds them. The portfolio is well constructed and paced, with the blue tones linking the people to the place.”

For a look at Guttman’s portfolio, and the portfolios of other 2015 TPOTY honorees, see http://www.tpoty.com/winners/2015. Winning images will be exhibited at the Museum of London Docklands in Summer 2016.